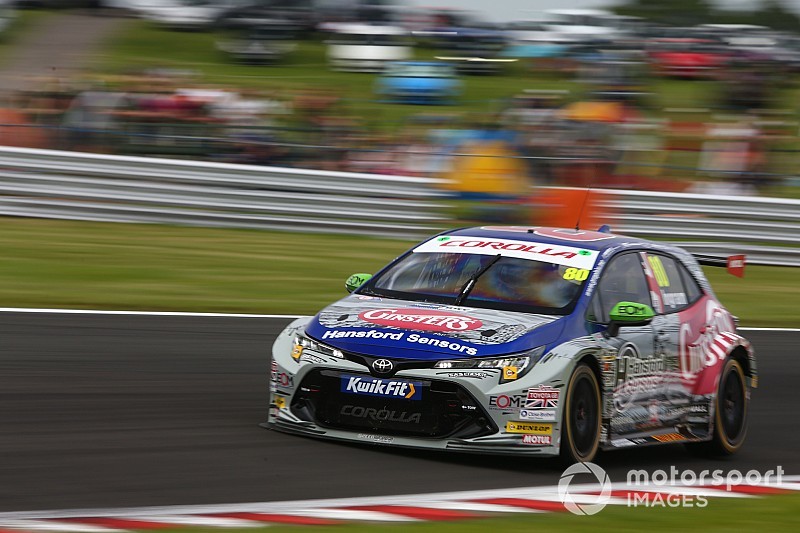 The Speedworks team has endured a difficult start to life as a manufacturer-supported team, but Ingram broke the circuit qualifying lap record to secure his third series pole.

BMW duo Andrew Jordan and Colin Turkington set the first representative times ahead of Ashley Sutton, with Jordan’s early lap of 1m55.369s over a tenth quicker than Cammish’s practice benchmark, despite the rear-wheel-drive runners having to take a centre of gravity hit this weekend as well as all non-BMW-engine competitors gaining an extra 0.02-bar of turbo boost.

Cammish and Sam Tordoff responded to Jordan emphatically, which meant the two Hondas were separated by just 0.041s at the top of times.

Team Dynamics driver Cammish then added another fastest overall first sector and a personal best second and third loops to head the table on a 1m54.851s, almost 0.2s clear of Tordoff.

But the session was briefly halted owing to a bizarre red flag waved for Stephen Jelley.

The BMW 1 Series driver suffered a technical issue in his Team Parker Racing car and so briefly stopped on track, but the Oulton Park race three winner did get underway again.

But after a delay, the session was stopped and so Jelley had his lap scrapped and was unable to take part in the rest of qualifying.

At the restart, Ingram went fastest in the first sector and the remainder of his lap was strong enough to leapfrog Cammish by 0.075s on his eventual pole time of 1m53.737s.

Cammish responded but was still 0.002s shy and chose not to continue in the session.

Brought in for the Snetterton round, each driver must run all three dry compounds across the three races.

It led to drivers exiting their cars prematurely and waiting out for the remainder of the session.

Both Ingram and Cammish felt their lap times were strong enough, and so it proved it be as track activity quietened.

AMD Tuning driver Tordoff held onto third place ahead of Tom Chilton as front-wheel-drive machinery dominated on a track that has previously favoured front-driven and non-ballast laden cars.

Points leader and defending champion Turkington – carrying the maximum of 54kg of success ballast – was the fastest rear-wheel-drive runner in fifth.

Jason Plato, who had been second quickest in the final practice session, fell to sixth in qualifying ahead of Jordan and Cammish’s team-mate Matt Neal.

The 2017 champion, Ashley Sutton, struggled in the speed traps and was a lowly 18th ahead of Josh Cook – running a sister FK8 Honda to Cammish and Neal’s machinery.

Aiden Moffat was 3.4s adrift of the pace as the Infiniti Q50 makes its return to the series after a four-year hiatus.