Josh Cook led all the way from reversed-grid pole position to claim his first British Touring Car Championship win of the season at Thruxton. 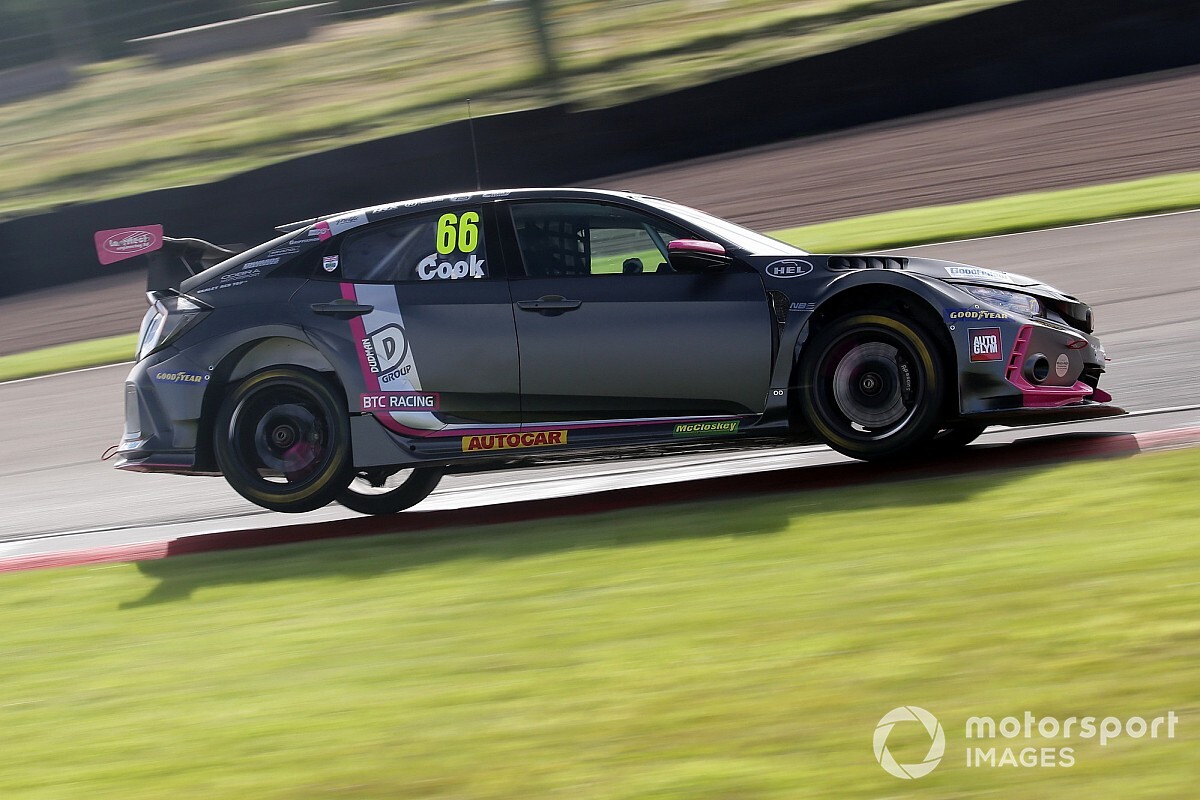 It is not the first time the BTC Racing Honda Civic Type R ace has taken the chequered flag first in 2020, but his previous on-the-road ‘win’ at Oulton Park was taken away from Cook when his car failed the post-race ride-height test.

Cook was pursued all the way through the race by team-mate Tom Chilton, the pairing breaking away from the pack and lapping in close formation past the halfway point. Then Chilton struck the tyre stack at the left-handed element of the chicane with the left-front of his Honda, damaging the car sufficiently for a severe vibration to set in.

Chilton, with his tyres wearing out due to the vibration, was over two seconds adrift of Cook going into the final lap, and he was then further hampered by a misfire, which would almost certainly have cost him second place had the race run a lap longer. Cook therefore won by 3.475s.

“We’ve been plagued with little issues – nothing we could have foreseen – through the whole day, so it’s been a tough day, and to finish with a win like this is what the team deserves,” said Cook. “We’re still not 100% but we’re getting there – I think some of the laps I’ve driven this weekend have been my best around here.”

Rory Butcher headed the rest, after getting ahead of Tom Oliphant’s BMW into the Complex on the opening lap. Ash Sutton in turn passed Oliphant for fourth with a dive at Segrave on the fifth lap, and from then on the new championship leader’s Laser Tools Racing Infiniti Q50 put Butcher’s Motorbase Performance Ford Focus under intense pressure.

Butcher put in a superb defensive drive, defending particularly at the Complex, where Sutton seemed stronger, to complete the podium. Tom Ingram, who had benefited from Oliphant’s loss of momentum as Sutton passed him to also demote the BMW, was right behind Sutton.

Whenever Sutton tried a move and failed, Ingram was right there looking to capitalise in his Speedworks Motorsport Toyota Corolla, but today’s two-time race winner had to settle for fifth. Oliphant took sixth in his West Surrey Racing-run BMW 330i M Sport, while the following train featured his pre-weekend championship-leading team-mate Colin Turkington.

Turkington spent most of the race mired behind the BTC Honda of Michael Crees, before finally finding a way past on the penultimate lap to finish eighth behind the Team Dynamics Civic of Matt Neal. Jake Hill was also close at hand to finish ninth in his MB Motorsport Honda from yet another of the Civics – that of Dan Cammish, who lost a few positions in early battle with Turkington.

A puncture struck Crees on the final lap, dropping him towards the rear of the field.