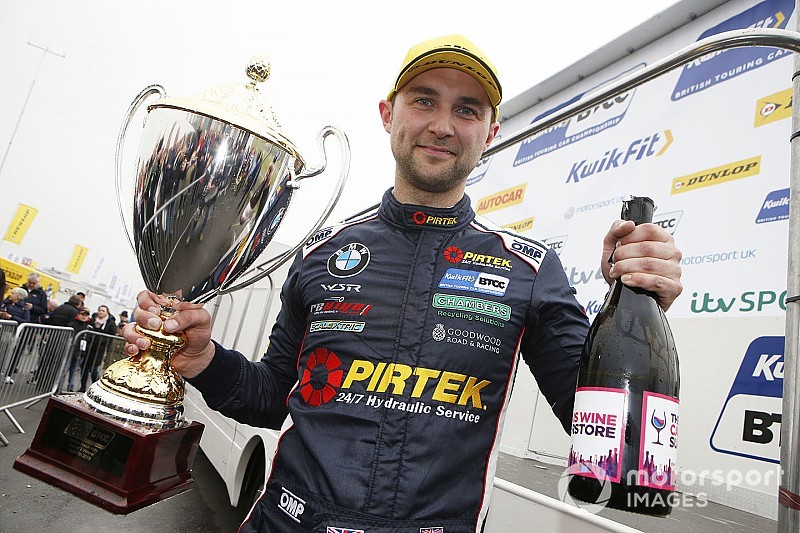 Although Turkington looked threatening early on, he made no serious attempts to overtake his teammate, leaving polesitter Jordan to take victory by 0.613 seconds.

Jordan led a particularly slow green flag lap, meaning his front-row rival and front-wheel-drive contender Sam Tordoff struggled to heat the rear tyres on his Honda Civic Type R. Combined with a strong getaway, 2013 champion Jordan was unchallenged off the line while Tordoff pulled to the middle of the circuit to cover off any further overtakes.

As Dan Cammish bogged down off the line, a rapid launch allowed Turkington up to third. His momentum continued, and he drew alongside Tordoff at the Complex before asserting himself in second on the entrance to Green corner.

From there he chased after the sister BMW 330i M Sport of Jordan, who was loaded with the maximum 54kg of success ballast, but never made a true attempt for the lead.

Cammish got stuck behind Tordoff and the two made contact on the entry to the final chicane, which sent both to abort the corner. That did promote Cammish up to third, and now clear he set off after the BMWs and closed in but was not in a position to challenge for second as he’d been given his final track-limits warning.

Despite a brief rain shower over the high-speed section of the circuit, Jordan kept his cool out front and doubled up on his race one success. He took the chequered flag six-tenths of a second clear to become the most successful driver this season with a hat-trick of wins.

An excellent opening lap from Power Maxed Raxing’s Jason Plato meant he climbed past Rory Butcher from sixth to fifth, as further woes for Tordoff gave Plato another place. Matt Neal in the second Team Dynamics Honda was fifth, ahead of Tordoff and his AmD team-mate Butcher.

Tom Ingram battled an unsettled Toyota Corolla to finish eighth ahead of the Vauxhall Astra of Rob Collard and BTC Racing driver Josh Cook. Sutton in particular struggled with the late drizzle in his Subaru Levorg and so dropped to 11th ahead of Jake Hill.

But the pre-event points leader has been drawn on pole position for the final, reversed-grid race.