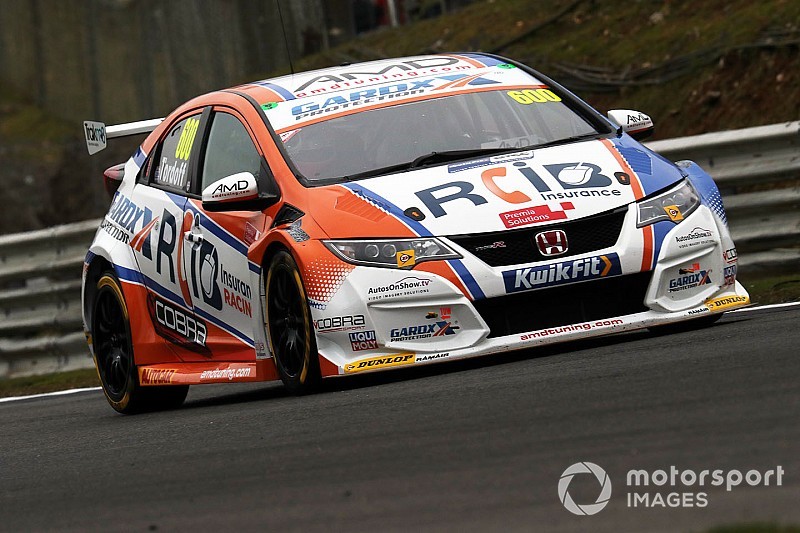 Tordoff had only been 15th in the dry second free practice session after focusing on race set-up, but in the dying moments of qualifying he posted a 1m15.511s time to set a new lap record and usurp practice pacesetter Dan Cammish.

In the first dry qualifying run of the season, and on the new hard compound tyres, rear-wheel-drive runners set the early pace as Andrew Jordan went fastest.

Matt Neal had ended last month’s Thruxton test in second but was an early casualty as he suffered a spin on his first flying lap through the high-speed Church corner.

But then front-wheel-drive runners Jake Hill and Tom Ingram came to the fore, going fastest as Jordan and teammate Colin Turkington were the first to lose their times to track limits abuse.

As Matt Simpson was another spinner at Church, testing pacesetter Cammish topped the times before Rory Butcher’s 1m15.724s put his older shape Honda ahead.

Butcher’s effort in the FK2 model remained unmatched for some time as the concurrent sequence of flying laps ended.

But on fresh rubber, Turkington found 0.07s in his BMW to head the way. Butcher did respond immediately but was another casualty of track limits offences and so lost his time.

After missing out races two and three at Donington Park having been hospitalised, Jordan was in fine form and pulled out 0.06s on his WSR teammate to sit first heading in to the closing minutes of the session.

But proceedings were halted by a lengthy red flag when ex-Formula 1 driver Mark Blundell and Tom Chilton came to blows at the chicane, which left Chilton’s Ford wedged into the tyre wall and the barriers needing repairs.

Jordan remained on provisional pole after a final five-minute shootout got underway, and it looked like he would remain unchallenged until Cammish returned to the top with two minutes to go.

But crossing the line with just three seconds on the clock, pre-season pacesetter Tordoff moved to the top to secure his team's first ever series pole.

Behind Cammish and Jordan, Turkington ended the day fourth from Butcher and Jason Plato's Vauxhall.