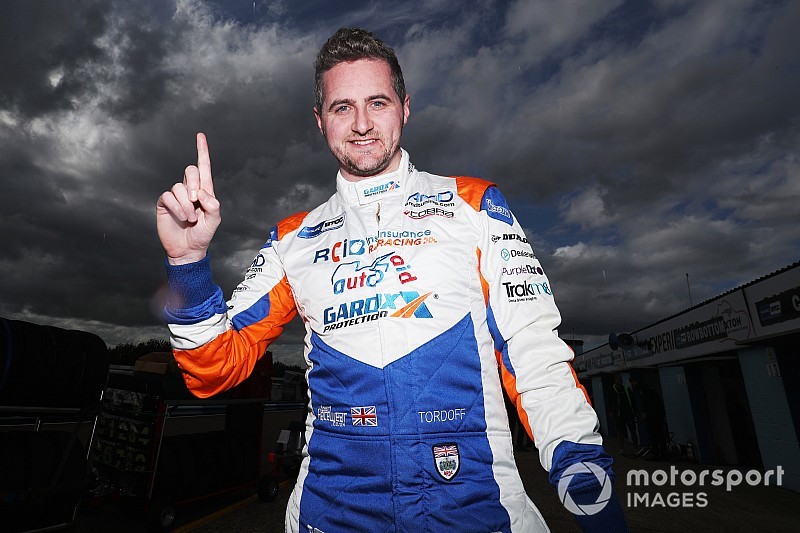 Sam Tordoff won the opening BTCC race at Thruxton from pole position, as second-place starter Jason Plato was relegated to 17th after a penalty.

The AmD Tuning driver’s 0.4-second victory over Dan Cammish earned the team its third series win, all scored this season, and Tordoff’s eighth – having last triumphed in the opening Silverstone race last season.

Tordoff had led the first race at Thruxton earlier in the year before an alternator failure sapped his car’s power and dropped him behind Andrew Jordan.

This time around, Plato was a match for Tordoff off the line and attempted to pass for the lead around the outside on the run through to Allard.

But as the pack headed on to the Complex, Tordoff’s inside line meant he could edge ahead in the braking zone to consolidate first place.

Plato remained in Tordoff’s tow for the remainder of the lap but was then was forced to serve a drivethrough penalty for a startline infringement.

The double BTCC champion had stopped his Vauxhall with its front bumper ahead of the line denoting his grid slot – falling foul of a new regulation brought in for the 2019 season.

With Plato dropped to the back, it allowed the FK8 Honda of Dan Cammish to give chase after Tordoff – driving the older FK2 ex-Team Dynamics Honda.

Tordoff crossed the line with a 0.843s advantage and although the race pace dropped by 1.3s per lap, he held on to the victory as the 30kg of success ballast aboard Cammish’s car hampered his pace on the abrasive asphalt.

Thanks to a change in engineering staff, the Ciceley Motorsport team’s new-found pace carried over from Saturday, with Adam Morgan crossing the line third.

The Mercedes driver pressured Cammish for much of the final third but was unable to take advantage.

The BTC Racing FK8 Honda of Josh Cook was fourth, while a ballast-free Tom Oliphant bagged rear-wheel-drive honours for the BMW 330i M Sport in fifth place.

Matt Neal took advantage of Ashley Sutton’s pass on Jordan through Church to climb to eighth.

The Honda driver had started in 17th, but when Sutton compromised Jordan’s line he snuck through and then used his superior straight line speed to demote the Subaru also.

Behind Sutton, the top 10 was completed by Chris Smiley with Tom Ingram in 11th.