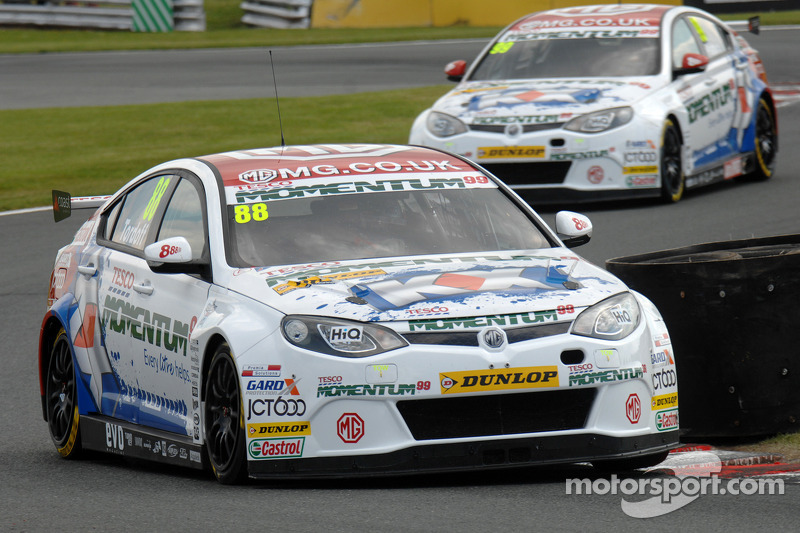 Earning his first British Touring Car Championship pole was a major accomplishment; adding to the excitement was the fact that he bested a past champion who is his own teammate!

Despite this being the 24year olds debut full season in the championship the former Clio and Porsche racer has already impressed immensely and has a best place of 2nd already to his name. Now returning to the track, which saw Tordoff take his debut car win back in 2009 when driving in the Clio Cup, the MG racer can now add his maiden pole position to that as well.

Following qualifying a delighted Tordoff said, “I’m thrilled with that. We knew we had the pace-we showed it in the test during the summer break, but you never know how the weekend is going to pan out. The first thing you have got to do as a racing driver is beat your team mate, and when that means beating Jason Plato it’s no mean feat. This gives us the perfect opportunity for tomorrow-I’ve shown I’ve got what it takes to beat the guys around me, now it’s time to go and do it”

MG went into the event as clear red-hot favourites after dominating the official test at the circuit last month and the MG duo proved just why they were given that tag as mentor followed apprentice, relating to Plato’s involvement in the KX academy of which Tordoff is a member, to claim the team’s second front row lock out of 2013 after the pair had each taken it in turn to lead the morning two Free Practice sessions.

Afterwards Plato was full of praise for Tordoff but admitted that it was a mistake that cost him dear by saying, “The fact is we know that I’m carrying 27kg of ballast and Sam isn’t –we know that’s worth three tenths, but in saying that I made a mistake on my lap. He nailed the lap, his performances this year are coming on leaps and bounds-he really in the groove now and that’s one of the reasons we got him in the car because we knew he was going to be quick. Not that there was a monkey on his back because he has already done a great job, but from now his demeanour will change and that will make him even quicker. I should have done a 1.55.7s and that would have been my best-I didn’t have the pace in my car to beat Sam today.”

Best non MG was reigning BTCC champion for Honda Yuasa Racing Gordon Shedden, who heads into the event with the same amount of ballast as Plato as the pair are currently level in the standings in joint third place. Alongside Shedden will be current points leader in the Independent championship and reigning champion Andrew Jordan in his Pirtek Racing Honda Civic.

Jordan is also currently second in the outright points standings and will stand a good chance of closing the gap as triple BTCC champion Matt Neal, in the second works Honda, failed to make it into the top 10 and will start 11th.

Once again leading BMW driver was 2009 BTCC champion and double race winner from Croft Colin Turkington who will lead off row 3, however team mates Rob Collard and Nick Foster continued to struggle ending up 16th and 20th respectively.

In 6th qualifying inside the top 10 for the first time this season was Aron Smith in his Airwaves Racing Ford Focus. The team have been working tirelessly to improve the car testing it heavily over the summer break and this was their reward, however team mate Mat Jackson couldn’t make the top 10 and will start 13th.

There was also mixed emotions for Smith as on the following lap he crashed heavily at Riches giving his Motorbase crew a lot of work to do before tomorrow’s opening race. Despite the crash Smith who was unharmed remained very upbeat and said, “The car isn’t looking great at the moment, but it will be fine. We have changed a lot on the car and it’s just so much better. I did one flying lap, which was great, and then I made the mistake but 6th puts us in a great position for tomorrow.”

Leading Toyota driver was Adam Morgan in his Cicely Racing Avensis with the next best Toyota starting 9th belonging to Dave Newsham for rival team Speedworks. In between the two Toyota’s will be reigning Clio Cup Champion Jack Goff, who qualified a best to date 8th, in his Team Hard RCIB Insurance Racing Vauxhall Insignia.

Goff shocked everyone at the recent tyre test, but was able to prove it was no fluke following his qualifying performance and earlier Free Practice sessions where once again he remained around the top 10.

Rounding out the top 10, qualifying inside the top 10 for the first time this season, was Dan Welch in his Welch Motorsport Proton Gen-2.

Leading the S2000 cars for the Jack Sears Trophy was current leader Lea Wood in his Wheel heaven/houseman Vauxhall Vectra. Last year Wood had looked on course for an outright podium until mechanical gremlins struck and once again Wood looked like he was going to be frustrated after a misfire held him back in Free Practice and during qualifying. However Wood benefitted from the lengthy red flag period to rectify the problem to secure class pole.

This weekend we will also see a number of returnees or car switching with American Robb Holland returning for Team Hard in their second Vauxhall as he qualified 21st. Andy Neate will at last make his debut in his own newly set up IP tech race engineering, Team Club 44 outfit, as he qualified his flame spitting NGTC Chevrolet Cruze 23rd.

James Kaye has made the switch from VW Golf to Honda Civic and qualified the AmD tuning.com Civic 24th and second in the Jacks Sears Trophy while Warren Scott, who departs the trophy following his switch to NGTC, was left frustrated by mechanical issues in his new VW Passat built by Team Hard and run in a joint venture with current team BMR Restart Racing, failing to set a time during qualifying and will start last in the 27 car grid.

Other drivers who were left frustrated and disappointed following qualifying were Tom Onslow-Cole in the second VW Passat who, despite claiming the car was coming into this weekend more prepared that at any other time so far this year, could only manage 14th . Even further down the field was last year’s pole sitter Frank Wrathall who just couldn’t find the set up all day in his Dynojet prepared Avensis and finished a disappointing 17th.

The final driver deserving a mention is Rob Austin in his own prepared WIX Racing Audi A4 who finished in 12th. This is because recently Austin was the victim of a horrific Shark attack while on holiday in Greece. Despite his leg looking less than pretty, Austin will continue to race this weekend and admits that he doesn’t see the leg giving him any issue’s other than a slight limp.