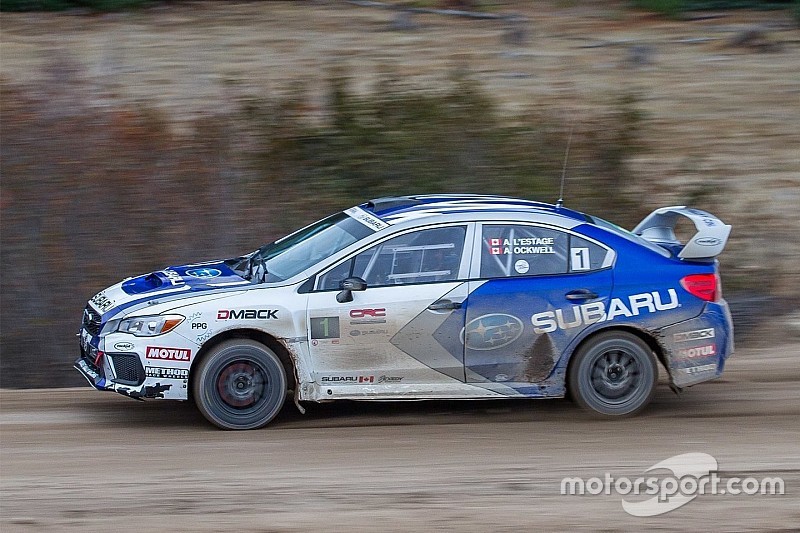 Subaru Rally Team Canada made of Antoine L’Estage and Alan Ockwell captured a dominant victory at the 2017 Rally of the Tall Pines held this past weekend around the region of Bancroft, Ontario.

As it is often the case, the late November event was marked by difficult wet and freezing conditions throughout the entire event that represented the penultimate round of the 2017 Canadian Rally Championship. L’Estage and Ockwell drove their Impreza WRX STI to a 50-second lead by the first service break. From there, they continue to push, but not too hard to the risk of damaging the car.

They completed the rally in 1:49.38, to beat newcomer Conner Martell and co-driver Dorman Grzegorz in their Impreza WRX by three minutes and twenty-two seconds. Martell and Grzegorz were forced to nurse a failing clutch for most of the event and suffered two flat tires on the last stage.

L’Estage only needs to start the final round of the championship, the Big White Winter Rally in British Columbia, in order to secure the 2017 driver’s championship.

As far as Martell is concerned, he’s a regular competitor in the Global Rally Cross series in the USA, and he came very close from winning the GRC Lites class championship this season.

Simon Vincent and co-driver Hubert Gaudreau were unable to hold pace with the cars ahead finishing well back in fourth overall, more than 10 minutes down to L’Estage. Vincent admitted that he choose the wrong tire most of the time and suffered several flat tires. Vincent was nevertheless crowned the 2017 champion of the Eastern Canadian Rally Championship.

Nicolas Laverdière and Vincent Trudel took fifth place overall in their Mitsubishi Lancer Evo 8. Sean Burke and Timothy Bauer were the lone 2WD team to arrive at the finish of the rally, finishing 10th overall in their Honda CRX.

The 2017 Canadian Rally Championship will conclude at the Big White Winter Rally in two weeks, December 8-10, in Kelowna, B.C.

Rally - Antoine L’Estage back in the driver’s seat

Rally - Antoine L’Estage back in the driver’s seat