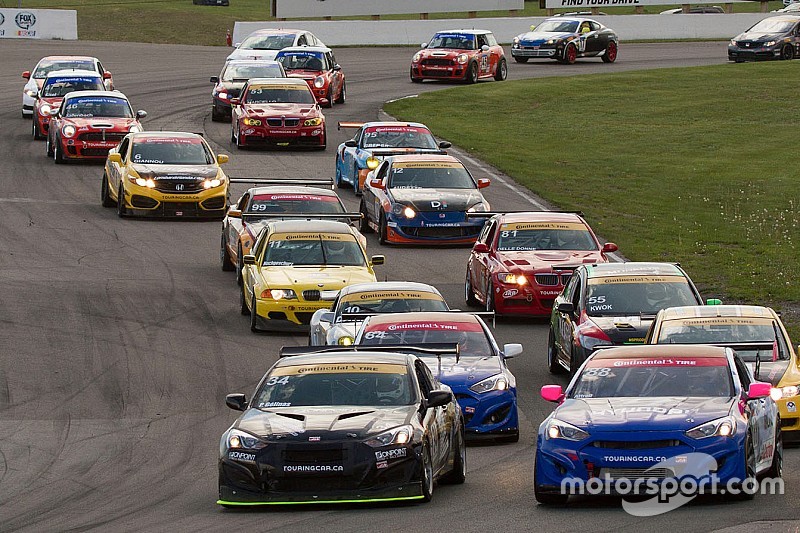 It was a record-setting weekend as CTCC presented by Continental Tire made its 10th anniversary season debut with a doubleheader event at Canadian Tire Motorsport Park at the Victoria Day SpeedFest.

Round 1 on the 2016 schedule was flagged away late Saturday afternoon with Kwok, aboard his No. 66 M&S Racing Mitsubishi Evo, launching onto the point over Scott Nicol’s Super Touring class No. 41 Honda, with former Touring class champion Damon Sharpe (No. 84 Hyundai Genesis) slotting into third spot from his fourth row starting position.

Benefiting from Sharpe’s problems and inheriting third place overall, and second spot in Super Touring class was Mathieu Audette whom, according to Nicol, “was on a mission”.

“I could have stayed with Gary, but the way Mathieu was coming, I had to watch both ends of my car to keep track of where everyone was,” said Nicol. “I don’t think I had enough to get past Gary for the overall (win), I was happy just to hold on to take the win in my class.”

For Kwok, he recognized that he was in a comfortable position; secure enough to maintain his front-running status in Grand Touring.

“I had the horsepower over Scott, so I only had to race against myself. I knew if I had to, I could have gone faster.”

Arguably, the loneliest man on the track was eventual Touring class victor, Michel Sallenbach. Starting from the 19th place in the pack, but second in class, Sallenbach had moved around Langeveldt and into the Touring class lead by the second lap, and then managed the gap, maintaining space around his No. 46 MINI Coupe, to eventually claim the win by .940 seconds over his Octane Racing teammate Andre Kisel (No. 47) and M&S Racing’s Jon Young.

“I didn’t have a chance to take it easy, “ admitted Sallenbach. “I knew how fast Andre was, so I had to push right to the checkered flag. We had issues with this car last year, but we’ve worked on it all winter and now we’ve achieved the goals we’ve been chasing. The confidence is back.”

Unfortunately, the 40-minute contest concluded under yellow flag conditions as the track safety crews worked to retrieve the No. 4 Honda of Christian Raymond from the Turn 5 tire wall, an accident that was the result of brake failure.

With Gary Kwok forced to miss Sunday’s feature race due to family commitments, it opened up the Grand Touring class chase, a challenge that was embraced by Race 1 runner-up Bob Attrell.

Inheriting the overall race lead on the second lap when Philippe Gelinas (No. 34 Hyundai) impacted the Turn 5 wall, Attrell maintained a cautious, but very quick, race pace to lead the remaining laps at the front of the field, taking the first Grand Touring class victory for the Genesis marque.

“This is the kind of event you hope for,” declared Attrell. “We had to sort this car in our Friday test day, and we worked on it after Saturday’s race. Our Hyundai Canada team came together and gave us a package that can keep us at the front.”

Crossing the stripe a mere 1.946 seconds behind Attrell’s race-winning car was the Super class victor, Eric Hochgeschurz in his No. 11 BMW 330i.

“I finally did it, my first win,” proclaimed Hochgeschurz. “I’ve been waiting a long time to get a win in CTCC!” He then added, “The funny part is, I think I made only two passes. It was all about attrition from the guys in front of me. But I tell you, once I was in the lead, the race couldn’t end fast enough for me.”

Another beneficiary of the attrition factor was Jon Young, No. 8 M&S Racing Civic driver outlasting both Michel Sallenbach, who retired his No. 46 MINI with engine issues, and Marlin Langeveldt, who was a victim of transmission problems in his No. 7 Mazda RX 8.

“This feels amazing, this is my first Touring class win,” said Young. “But it was a hard race for me. I didn’t quite have the pace of Michel and Marlin, I just drove consistent laps and let the race come to me.”