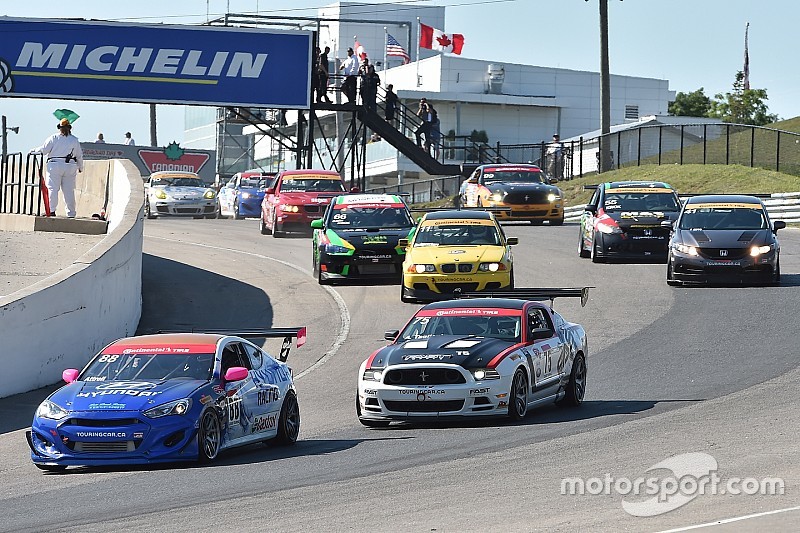 As the 2016 season draws to an end, Canadian Touring Car Championship presented by Continental Tire challengers are determined to make life difficult for the class point leaders.

Returning to the dauntingly fast Canadian Tire Motorsport Park circuit over the Labour Day weekend for twin 40-minute races, Blanchet Motorsports driver Bob Attrell set the tone early as he guided his No. 88 Hyundai Genesis Coupe to the Grand Touring pole position, lapping the CTMP track even faster than guest driver Alex Tagliani aboard the Fast Wheels No. 75 Mustang.

From his front row starting position, Attrell would go on to lead all 27 laps in the weekend opener, the pressure on his position somewhat relieved when Tagliani’s Ford retired with a suspected engine sensor failure. Blanchet Motorsports teammate Damon Sharpe (No. 84) would secure the runner-up spot, albeit 25 seconds behind the class winner, with point leader Chris Sahakian (No. 99 United Auto Racing Mustang) a further 15 seconds in arrears in third place.

Late Sunday afternoon, a start-line incident involving Jerimy Daniel, Karl Wittmer and Marlin Langeveldt caused a full-course caution for several minutes. After the restart, Attrell repeated his winning performance, although he spent nine laps staring at the tail-lights of Gary Kwok’s No. 66 M&S Racing Mitsubishi. On lap 16 Kwok was relegated to second place, a position that he maintained until the checkered flag, while Sahakian again raced to his second consecutive third-place result.

Benefiting from his pole position for the Super Touring twin bill, point leader Eric Hochgeschurz fell into a comfortable rhythm in the opening round, pushing just hard enough to keep the No. 41 Velocity Motorsports Honda and driver Scott Nicol behind his No. 11 BMW. Dramatically, with just two laps remaining until the checkered flag, a ‘bad noise’ and a loss of momentum forced the yellow Bimmer to coast to a stop, a broken driveshaft sideling the 8Legs Racing entry. Nicol graciously accepted the gift victory over a distant Michael DelleDonne and the No. 81 RMP Competizione BMW.

After overnight repairs by the 8Legs crew, the No. 11 returned to the battlefield, and following a spirited, three-way dice with DelleDonne and Nicol. Hochgeschurz once again found his way to the top step of the Super Touring podium.

The No. 7 Mazda and the No. 46 MINI spent the opening ten laps running in lockstep at the front of the Touring class pack, but on lap 11 Sallenbach’s MINI emerged at the front with Mac Korince (No. 52 Civic) now in close pursuit. With five-to-go, Korince’s Honda fell off the pace, his second-place position eventually assumed by Jon Young and his No. 8 M&S Racing Honda. Sallenbach and Young would hold station to the checkered flag, with Nelson Chan (No. 45 Team Octane MINI) passing the slowing Korince to grab a third-place finish.

In the Sunday finale, by lap six the Touring class running order was once again Sallenbach, Young and Korince at the front of the field. The three-car train would spread out as the laps wore on, but the order remained the same, with point leader Sallenbach padding his advantage in the Touring class standing with a second race win on the Labour Day weekend.

The championship for all three classes will be determined on a tripleheader race weekend taking place on the 5.05-kilometre Calabogie Motorsports Park on October 1st and 2nd.