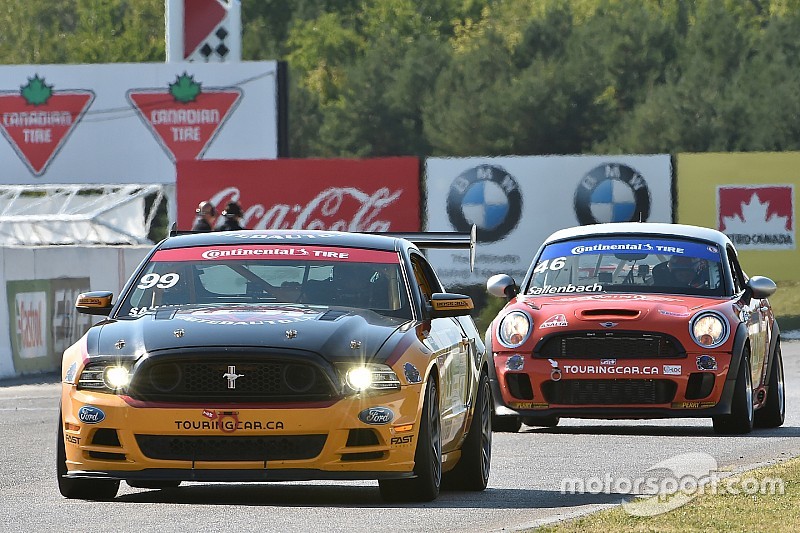 With 100 points available for a class victory, plus bonus points for poles and laps completed, no lead was secure as the CTCC rolled into Calabogie Motorsports Park on October 1-2 for the triple header season finale.

As the season of the Canadian Touring Car Championship drew to a close with so many points left on the table, the emphasis was even more focused on reliability and finishing races rather than outright speed and race craft. Adding another element of challenge for the competitors was the changeable weather and track conditions, as well as use of the track’s different configurations. Saturday’s race was on the east ‘Stadium’ circuit, while in Sunday’s twin bill, the full 5.05-kilometre track was used.

If the various class point’s leaders, Chris Sahakian, Eric Hochgeschurz and Michel Sallenbach felt any additional pressure, it was not evident as all three drivers maintained their expected, competitive race paces. Unfortunately, the same could not be said for their championship rivals as many fell victim to either mechanical or error-induced misfortunes.

In Grand Touring, it was Benjamin Distaulo (No. 6 Honda) and Gary Kwok (No. 66 Mitsubishi) taking the overall, and GT class, victories in the opening two rounds. Distaulo was unable to take the green flag after Saturday’s race due to a melted piston in his Civic.

In regards to the overall championship, Sahakian guided his No. 99 United Auto Racing Mustang to finishes of fifth, second and, in the season finale, a class victory, guaranteeing the 24-year-old a championship in his first full CTCC campaign.

“I couldn’t have asked for more. There is no better feeling than being rewarded for all the effort with a championship in a series as competitive as this one,” commented Sahakian.

For Super Class leader Hochgeschurz, he was determined to put his stamp on the 2016 championship and he succeeded by sweeping to victory in the weekend’s opening two races. Concluding his year in dramatic fashion, Hochgeschurz saw the powerplant in his No. 11 8Legs Racing BMW explode with just four laps remaining in the season, handing the Super class victory to an adrenaline-fueled Jerimy Daniel and the No. 10 Porsche Cayman. Despite this issue, Hochgeschurz has accumulated sufficient points to guarantee him his first Super Class crown.

“We had a two year plan when we came back into the CTCC,” explained Hochgeschurz. “We were fast last year, but we never won. When we got our first win this year, we knew we had the package to go for the championship. That gave us the confidence, so we stuck to our game plan and went race-to-race, going for wins, but taking what we were given.”

While Hochgeschurz was sailing to the 2016 crown, the same could not be said for challengers Scott Nicol and Karl Wittmer. Despite a pair of podium results over the weekend, Wittmer’s weekend was spoiled due to faulty transmission in the Honda in the opening race. Nicol’s Velocity Motorsports Civic could never find its normal speed over the weekend, his efforts ending due to missing third and sixth gear in the box.

Experience drawn for over 100 CTCC Touring Class races led Michel Sallenbach to a conservative mindset for the final trio of races, obvious in race one when he cautiously followed Jonathan Young (No. 8 M&S Racing Civic) to the checkered flag. When Young spun out of contention in the second race of the weekend, the driver of the No. 46 MINI Coupe went into cruise mode, taking the win by over 13 seconds from Team Octane teammate Ian Madden. A duplicate finish completed the 2016 season for the ever-smiling Sallenbach as the Roxton Pond resident secured his second Touring Class title in the past three years.