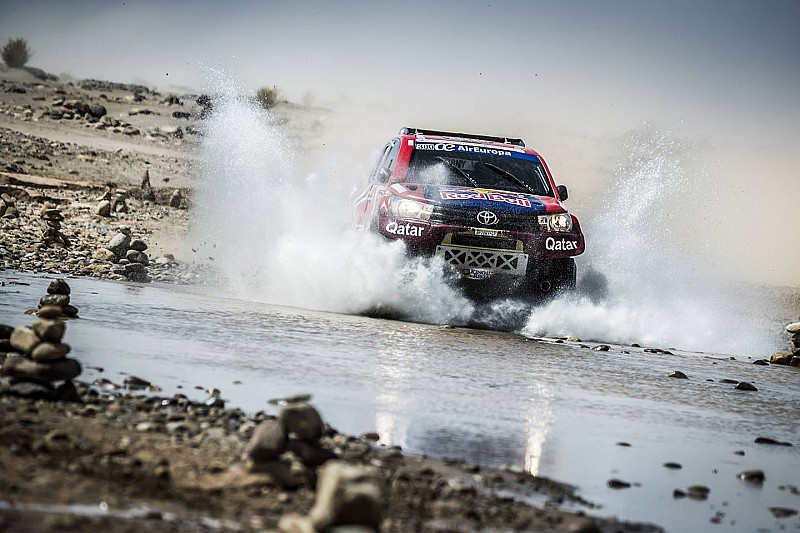 Nasser Al-Attiyah completed a Rally Morocco hat-trick after winning the event for the third time in a row, beating nearest rival Carlos Sainz by more than 10 minutes in the newly-introduced Toyota Hilux Overdrive.

After taking an early lead on Day 1, Al-Attiyah opened up a gap of 14 minutes in the following leg as Sainz, giving the recently unveiled Peugeot 3008DKR its debut, got lost, dropping 17 minutes.

The Spaniard recovered with a six-minute win on the third day, but Al-Attiyah was fastest again in the penultimate run, starting the final stage with a gap of over 16 minutes.

The Qatari driver, who switched from Mini to Toyota this year, cruised to the finish to remain unbeatable in the event since the its rebirth in 2014.

Sainz finished second after missing out on winning the final leg by just six seconds from Peugeot teammate Cyril Despres, who was out of contention in the general classification after having rolled on the opening stage.

Former WRC star Mikko Hirvonen (X-raid Mini) also dropped out of contention with a roll on the penultimate day.

Meanwhile, 2016 Dakar winner Toby Price was victorious in the bike/quad category, despite losing his lead twice during the rally.

The KTM rider first fell behind Paulo Goncalves on Day 2, but the 2015 Dakar runner-up suffered a mechanical issue and failed to complete Leg 3, giving back the lead to Price.

However, Price lost over three minutes on the fourth day after stopping to aid the crashing Kevin Benavides.

That allowed Sam Sunderland to enter the final day in the lead, but the Briton was nearly nine minutes off the pace in the end and it was Price triumphing after all.

Sunderland settled for second to complete a KTM 1-2 with Pablo Quintanilla and the Yamaha duo of Helder Rodrigues and Xavier de Soultrait rounding out the top five.