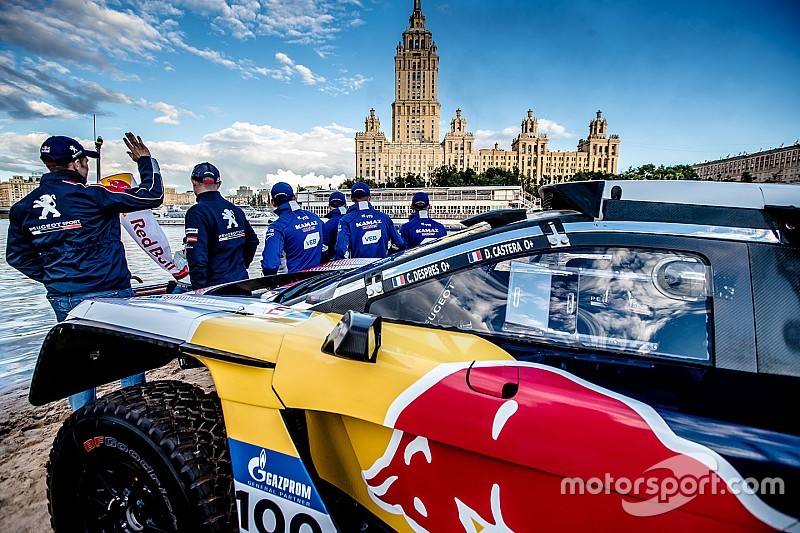 The next chapter of rally-raid adventure racing gets started in Moscow today with the convoy of Silk Way Rally competitors being waved off from the city’s iconic Red Square.

What awaits is a two-week, 10,000km Trans-Eurasian odyssey with only the best of the best coming to test themselves on this perilous route. Among those ready to get stuck into the action are the big beasts of Peugeot and Kamaz who both set off for China on a mission to defend their titles.

With wins at the last Silk Way as well as the last two editions of the Dakar Rally it’s clear that Team Peugeot Total are the guys to beat on the road to Xi’an. With a wealth of offroad experience the pressure is on Cyril Despres and his team-mates Stéphane Peterhansel and Sébastien Loeb to deliver yet another car category victory for the French team.

My car’s strongest point is its ability off-piste. We should be able to attack the dunes of the Gobi Desert in total confidence.

In the chasing pack it’s all fresh ground for Bryce Menzies who is racing his first two-week rally-raid. The American has proven his credentials time and time again with a string of SCORE and TORC Series wins in his homeland. Now Menzies is going wheel-to-wheel with an international cast of offroad racers.

“We’re hoping to be on this rally for 16 days so the first aim is reach the Rest Day and then we can see how we go from there.” – Bryce Menzies

In the blue corner of the Silk Way truck race we find the reigning heavyweight champions – Team Kamaz Master. The Russians have dominated their home event in recent years and have four drivers all capable of a podium finish entered this time around. Ayrat Mardeev and Eduard Nikolaev have both tasted glory at the Dakar while Dmitry Sotnikov and Anton Shibalov will be out to impress their home support.

We don’t have the option to under perform because our whole country is watching us and wishing for us to win this race.

However, the increased international appeal of the Silk Way has attracted Kamaz’s major rivals to the rally running through Russia, Kazakhstan and China. Legendary Dutch trucker Gerard De Rooy has arrived in Moscow with his Iveco machine while there’s strong line-ups from Renault and Tatra also in the mix.

The Silk Way’s ceremonial start will take place in Moscow’s Red Square today with the race against the clock starting tomorrow. A total of 14 stages will be contested before the competition convoy arrives at the chequered flag in Xi’an on Saturday, July 22.

Ayrat Mardeev #300: “It’s makes us so proud to see so many fans coming out to cheer for us. At Red Square you will see a big, big crowd there to support us and this is something that we’re all extremely grateful for. We don’t have the option to under perform because our whole country is watching us and wishing for us to win this race. For sure it adds some pressure on us, but this is the way we like it to be. With so many great trucks in the race it feels like the Champions League of rally-raid and we can’t wait to get started.”

Eduard Nikolaev #307: “Whenever we compete we always try to give 100 percent so we don’t do anything differently for the Silk Way Rally. However, because we are competing in front of our home fans in Russia it’s impossible not feel some extra reasonability to give them something to cheer when they come to see the race. We have all of our strong competitors here with us at the Silk Way so we know the only way to get a good result is by our team being the best we can be. I think the truck category is going to provide plenty of drama this year.”

Cyril Despres #100: “I’ve been checking the weather forecasts because this can have a big impact on a trip like this. It looks like it will be extremely hot in China but here in Russia we’ll be getting plenty of rain. It’s a pity for the mechanics if the first stage ends up full of mud because they’ll have some dirty cars to clean at the end of the day. It’s useful to know what weather to expect but of course there’ll be plenty of surprises out there. We don’t know too much about the route so there’s lots still to discover.”

Sébastien Loeb #104: “I’m excited by the challenge of driving our new Peugeot 3008DKR Maxi at the Silk Way. I think the car is more stable now that it is wider and it feels a little different to drive. This rally offers us the full range of terrain to try out the car in racing conditions. My car’s strongest point is its ability off-piste. We should be able to attack the dunes of the Gobi Desert in total confidence.”

Stéphane Peterhansel #106: “I’m not going to forget last year’s Silk Way in a hurry because on the third day we made a big mistake and we rolled three or four times. We completely destroyed the car and it was a very complicated day. I have to give credit to our team of mechanics and engineers we managed to fix the car and we were able to complete the race. Despite our mistake we were still able to enjoy this amazing race, it has so much variety in the terrain so everyday brings a new challenge.”

Bryce Menzies #105: “It feels huge to finally be here ready to get started on one of these mammoth two-week rally-raids. Silk Way is one of the biggest rallies and it could be the toughest of them all. I’m excited but I’m also ready to be patient when the thing gets started. We’re hoping to be on this rally for 16 days so the first aim is reach the Rest Day and then we can see how we go from there.