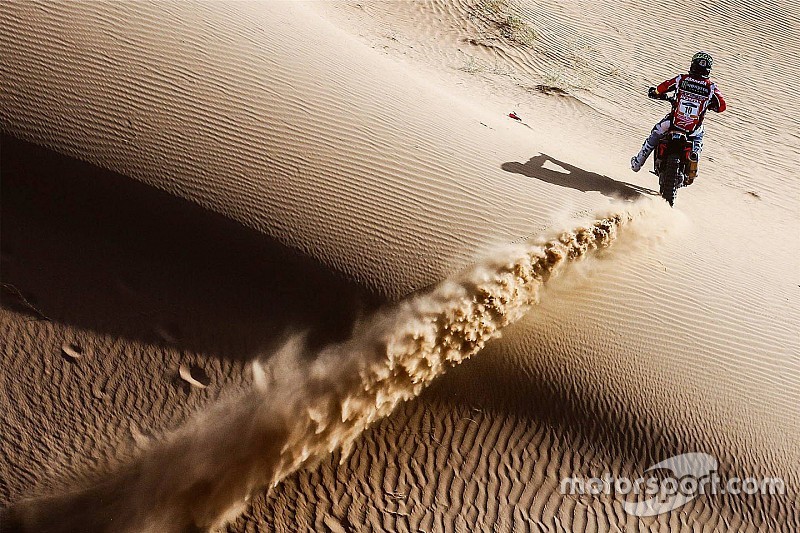 Honda's Joan Barreda has extended his lead in Merzouga Rally by winning Wednesday's third stage in Morocco, despite a brief fall from his bike.

By claiming the first Marathon stage (without assistance), he has extended his lead to almost 13 minutes over his teammate Kevin Benavides.

"It was a good day, I started sixth and took advantage of the first guy's lines," he said. "The second part was much harder with a lot more stones and I had a small fall, but nothing important and I was able to continue without problems.

"For tomorrow I hope to have a safe day because we have already done a great job. I am doing a perfect rally, without making mistakes, but everything is still tight and everything is open."

In a stage of 211km – after race direction reduced it by 30km because of a dangerous zone – crossing the dunes of the Erg Rissani and the Erg Chebbi, the stage also featured long gravel roads and dry river canyons. Pablo Quintanilla was second to Barreda on the stage, losing 8m59s to him.

KTM's Toby Price was third, and had Franco Caimi tailing him during almost the entire stage, losing almost 11 minutes to Barreda.

Barreda's overall lead has extended to 12m51s over Benavides, and 13m52s to Quintanilla.

In the quad class, rally leader Axel Dutrie stopped to help another rider and therefore initially lost 18m42s at the stage end.

But his time was soon adjusted, and he wound up second in the stage behind winner Gary Aldington.