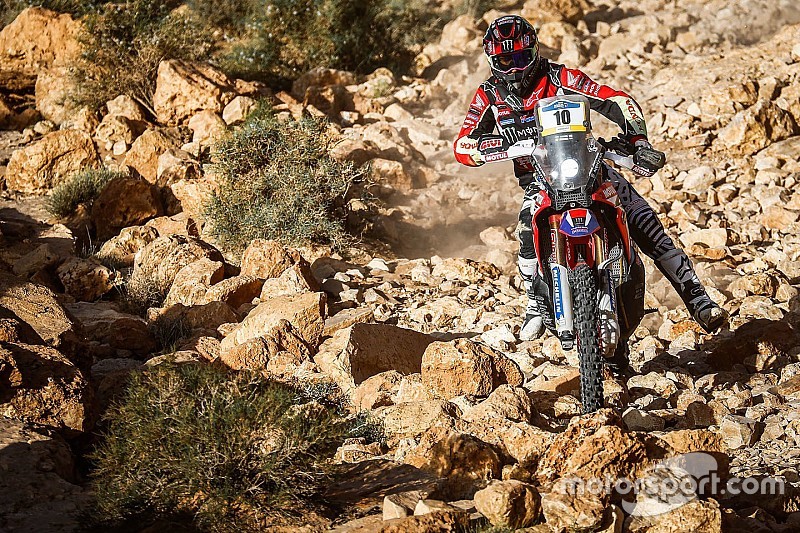 Honda rider Joan Barreda has clinched victory in the 2018 Merzouga Rally, as Pablo Quintanilla topped the final stage of the event.

Barreda, who retired in the closing days of this year's Dakar while fighting for victory and had surgery on his left wrist only two months ago, braved the Moroccan dunes to win the Merzouga marathon by 6m10s from teammate Kevin Benavides.

"I am very, very happy to have achieved this victory, it means a lot to me after the bad taste of the Dakar," Barreda told Motorsport.com.

"I had doubts about how my wrist would go, but it allowed me to have a good rhythm and, although it is now inflamed, it is recovering well.

"Two months ago the team talked about whether I could get here and it looked almost impossible to me."

Barreda also had to overcome a collision with rival Quintanilla in a chaotic finish to Thursday's stage, which left the latter with a knee injury - but did not prevent him from topping the final 33.8km test by three seconds over Benavides.

This allowed Quintanilla to complete the overall podium for Husqvarna, with Yamaha works rider Franco Caimi in fourth place.

Frenchman Axel Dutrie wrapped up victory in the quad class by the gargantuan margin of 1h43m28s, with Jeremy Forestier and Antonie Vitse making up the top three.