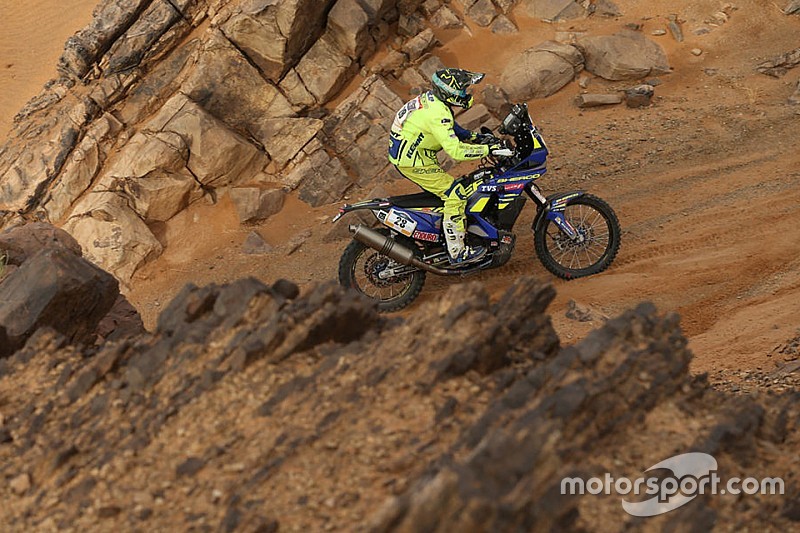 Sherco TVS rider Aravind KP broke inside the top 20 after the penultimate stage of Merzouga Rally, closing in on compatriot and Hero rival CS Santosh.

Thursday’s second marathon stage was spread over a distance of 206 km, with lack of external assistance and a tricky terrain challenging the riders to the extreme.

KP, who made his maiden Dakar debut appearance this year, set the 23rd fastest time of the day, but saw his ranking improve to 20th as several rivals faltered.

Santosh, the only other Indian to take part in Dakar, however, could fare no better than 40th in Stage 5 after losing crucial time with a crash in the Sahara desert.

The 33-year-old has fallen down to 17th place in the overall standings, but has one day’s of running remaining to regain lost ground.

"The Marathon stage is generally the turning point of any cross country any rally," he said. "For me the marathon stage started alright but a couple of crashes and navigations errors hampered my performance.

"I wasn’t feeling too good with the bike and found that I had some damage there. My focus was to bring it home today and get it in shape for the last stage tomorrow.”

While Santosh had a troubled day, Joaquim Rodrigues brought much delight for Hero, finishing as the top foreign rider on an Indian-make bike.

Rodrigues, who secured an impressive 12th place result on his Dakar debut in January, finished just 1m07 behind de Soultrait in fourth place in today’s order. The result has propelled the Portuguese rider back inside the top 10 in the overall standings.

Sherco TVS riders Adrien Metge and Joan Pedrero finished within touching distance of Rodrigues, with the two riders crossing the line in fifth and sixth positions.