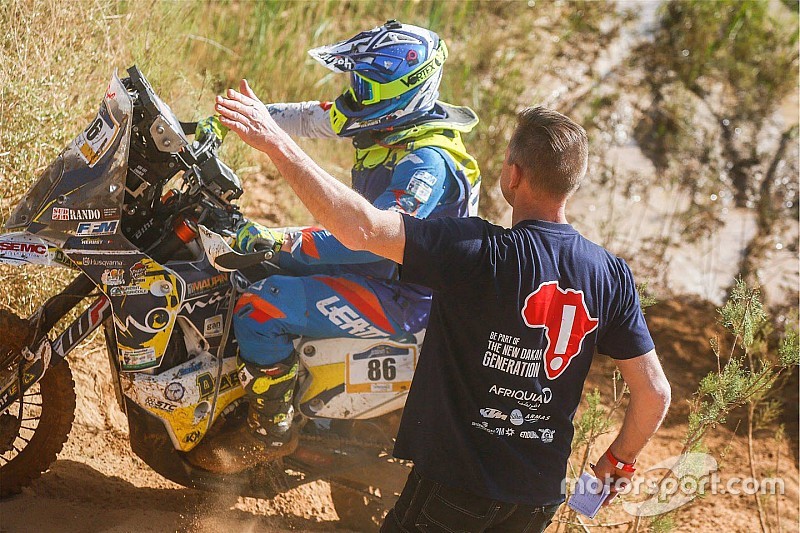 Honda's Joan Barreda still leads the Merzouga Rally, but Thursday's stage was overshadowed by a bizarre finish, where an unclear roadbook caused chaos and a collision between Barreda and Pablo Quintanilla.

Alessandro Botturi (Yamaha Italia) emerged from the mayhem with a 3m44s stage win over Paulo Goncalves.

Botturi, 42, put his victory down to riding at a slower pace than rivals, and then benefitting when they tripped over themselves.

The controversy occurred only three kilometres from the finish line of the 233km stage. There, according to several riders and team members, the roadbook was not clear and it directed them to turn right towards a track that could not be seen.

Apparently, sand had covered that route completely and it only appeared 300 meters later, but without a clear course to follow in the roadbook, bedlam broke out.

Quintanilla (Husqvarna) and Barreda collided when the latter did not see the Chilean. Quintanilla has injured one knee, but it seems he will be able to finish the rally tomorrow.

Only one of the top six riders escaped the chaos, as Ricky Brabec (Honda) finished 8m32s behind Botturi. Some lost more than 40 minutes.

Barreda's lead has been pegged at 5m02s over KTM's Toby Price and 6m31s to Benavides.

"The last kilometers of the roadbook have been crazy," said the leader. "I think the organization has been wrong because we all have lost and the notes were not clear. But still I could maintain the leadership."

In the quad class, Antoine Vitse won over Tomas Kubiena by 1m51s to enhance his already-massive lead.

UPDATE: Owing to the problems with the roadbook, it was decided to annul the final section of the stage and declare a result after 224km.

It means Benavides is now the winner of the stage, by 12 seconds from Honda teammate Brabec and 56 seconds from Sherco TVS rider Joan Pedrero.

Barreda retains a 6m33s lead overall from Benavides, with Quintanilla third, 11m51s off the pace.