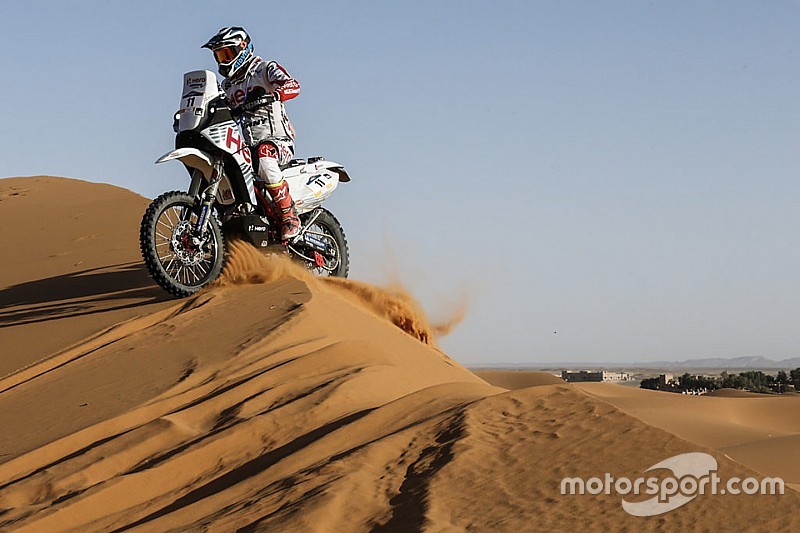 Hero’s CS Santosh continues to remain the top Indian rider in the 2017 Merzouga Rally by a country mile, while Sherco TVS’s Aravind KP and Abdul Wahid broke inside the top 30 on Tuesday.

Stage 3 of Merzouga Rally comprised of 175 km, with riders taking two loops of Erfoud, an oasis town in Morocco. Matters were complicated by a desert storm, which passed the second half of the stage.

Santosh completed the day in 17th position after a malfunction in his roadbook equipment delayed him in the first loop. However, the 33-year-old continues to hold 15th position in the overall standings with a total time of 8hr31m49s.

“Today was going to be a relatively short day with just 2 stages and a lot of navigation,” he said.

“I started the stage really well and I was able to catch the rider in front but then a malfunction happened in the remote that controls the road book and the echo to the odometer.

“It was a bad 1st part of the stage for me. Team fixed the issue at the stage break and 2nd loop was good for me until I got caught in the storm for the last 4 km or so.

“Overall I rode well today but lost some time. I am now looking forward to the marathon stage.”

Meanwhile, KP recovered from yesterday’s troubles to set the 22nd fastest time of the day, elevating himself to 25th in the overall standings.

Wahid, who is making his first international appearance in Merzouga as a reward for winning India Baja, was another big gainer, rising from 34th to 26th in the table.

Hero’s Joaquim Rodrigues was also hit by misfortune, with a hole in his bike’s coolant system losing him precious time.

The timing of the sand storm also proved costly, forcing him to stop in the middle of the run while many of his close rivals had already crossed the finish line.

The Portuguese rider has starkly dropped to 16th place, but has three days to recover his position and repeat his last year’s top 10 result.

“I was feeling really good at the start of the stage and tried to catch the guys in front of me,” he said.

“But then my bike started losing water because of a puncture in the cooling system. I managed to finish the 1st loop somehow.

“The team fixed the issue and I started the 2nd loop well only to get caught in a big sand storm.

“I had to stop in the beginning as I couldn’t see anything but then I started again, driving at a very slow speed of 5km/hr to bring the bike home safely.

“It was really hard to navigate in the storm but in the end I am happy to be back safely."