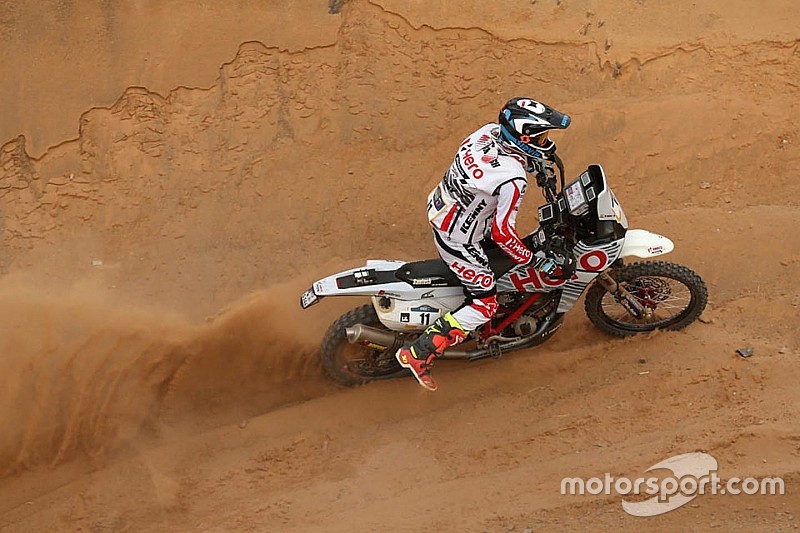 Hero’s CS Santosh finished as the top Indian rider in the 2017 Merzouga Rally, but it was Sherco TVS that emerged as the lead Indian manufacturer after the final stage on Friday.

After two marathon stages, riders were tasked with a rather straightforward passage to the finish line on the final day of Merzouga Rally.

The surviving competitors had to complete a relatively short timed distance of 50 km, with two additional transportation stages of 44 km each.

Santosh, who remains the only Indian to finish Dakar, completed the Merzouga Rally in 17th position with a total time of 18hr32m34s.

The 33-year-old ran inside the top 15 for majority of the duration, but technical niggles in the tricky marathon stages dropped him to the lower reaches of top 20.

However, he still finished well clear of Sherco TVS rival Aravind KP as the lead Indian rider in the Merzouga Rally.

“What a great end to a fantastic 6 days of racing here in Morocco,” he said. “It has been a year since my journey with Hero began and I have definitely made a lot of progress from the way I rode last year to this year.

“I came here with the target to gain experience and finish the Rally with a decent result. I’m happy to have achieved both. Overall, an exciting and purposeful Rally for the whole team.”

KP, who made his debut appearance in Dakar this year but retired midway, was classified 21st after six days of rallying, less than two hours behind Santosh.

The 2015 Raid de Himalaya was hit by a hefty 31 minute penalty, but fought his way back to finish on the cusp of a top 20 finish.

“It was great,” the Sherco TVS rider told Motorsport.com. “This is my first time in a big rally with a different bike and though stages and everything it was new for me. I really enjoyed a lot. In dunes it was like I were having fun.

“Navigation was tricky this time and very difficult. For me it was so difficult for my first time. Every day I was learning, learning and learning. Many things for me were a surprise as sandstorms. I lost twice in sandstorms. That was a very tricky day.

“Difficult part was with the sandstorms on Marathon Stage that day. Last 20 km was tricky navigation and I lost searching for a WP. But at last I finished the stage.”

Among foreign riders on Indian bikes, Pedrero held the flag high for Sherco TVS with a top five finish.

Meanwhile, Joaquim Rodrigues finishes as the leading Hero rider in ninth, having recovered lost ground from an oil leak that dropped him outside the top 10 in Stage 3.

“It was a good last stage for me, arriving second,” the Portuguese rider said. “There was a big battle happening in the dunes which was a lot of fun.

“I pushed hard and made it to the lead but I lost time due to two crashes. Very happy for a good result for the Team. It was a good rally for us and now we focus on the next rallies to come. ”

Adrien Metge, who had to deal with own issues in the early stages of the rally, was eventually classified 53th, despite the Sherco TVS rider showing pace to finish inside the top 10.