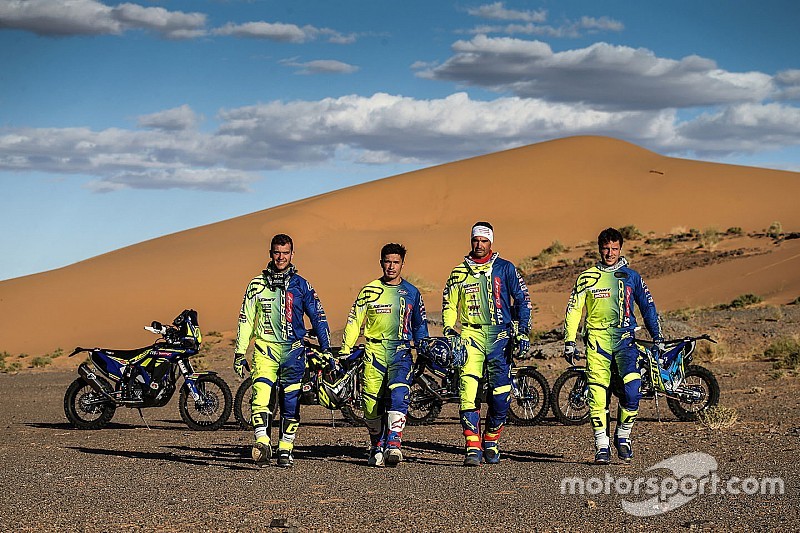 Sherco TVS started the 2018 Merzouga Rally with a top 10 finish in Sunday’s Prologue, while Indian rider CS Santosh was classified 27th for Hero.

The ninth edition of Merzouga Rally got underway yesterday with a short five kilometre stage in the Merzouga region of Morocco, which was run during sunset.

Joan Pedrero led the charge for Sherco TVS with a time of 5m45s, 20s and three positions down on leader and Honda rider Kevin Benavides.

Lorenzo Santolino, who competed in his first rally on Indian soil last month, finished just a second adrift of his teammate in fifth but his participation in the remainder of the rally remains under question on health grounds.

The Indo-French partnership’s debutants Duplessis Diego Martin and Vanni Cominotto were classified 15th and 34th respectively, the former completing the Prologue within a minute of Benavides.

"It’s a good start for the team,” David Casteu, Team Manager, Sherco TVS said. Joan Pedrero is riding his Dakar bike and has plenty of experience. He is off to a flying start, he is very motivated to have a good finish in this rally.

“Despite the good start, Lorenzo Santolino is down with viral fever and we will find if he will be able to start this rally. Martin Duplessis is very happy with his bike, he is very enthusiastic, and he brings a lot of motivation to the team.

“He has already raced in South America, this is a big first for him to race in Africa. Vanni Cominotto is discovering how to navigate in the desert and he is getting to know his bike. He is very tense, but the team is here to give him confidence. Like the other riders, he is very satisfied with the handling of the bike.”

Mena’s teammate Santosh, who is the only Indian rider in this year’s Merzouga Rally following Aravind KP’s withdrawal due to Dakar injuries, finished 27th, 2m17s down on the fastest time of the day.