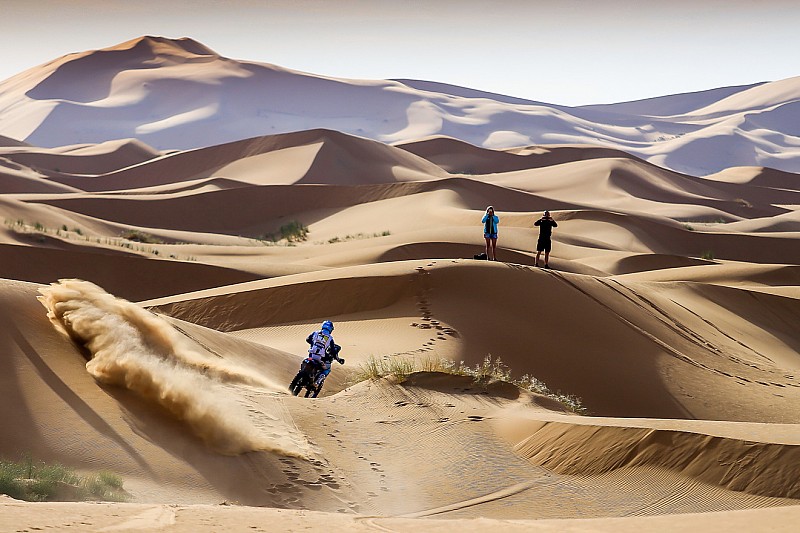 Adrien Van Beveren (Yamaha) extended his lead in the Merzouga Rally after his nearest rival, Michael Metge, broke the engine of his Sherco TVS on stage three of the Moroccan event.

The third stage of the 2019 Merzouga Rally consisted of 229 timed kilometers, divided into a first part of 89km with a very hard terrain, 33km of neutralized running and then 107km final in labyrinth mode. The contenders will now sleep under the stars without mechanical assistance until the end of Thursday's stage four.

The rain made an appearance during the morning and complicated the lives of the participants. Metge, who began the day classified second in the bikes standings, made a navigation error as soon as he started and later broke the engine of his motorcycle 198km into the stage.

"I had a mechanical problem about 25km from the end, the engine broke down and there is nothing to do,” he said. “Now I hope the team can change the engine and I could enjoy what remains of rally out of the fight.”

Van Beveren did not miss the opportunity and won his second stage, adding 2m23s to his lead over Stefan Svitko (KTM) and 3m08s to Oriol Mena (Hero). Overall, Yamaha's Frenchman leads by 16 minutes over Joaquim Rodrigues (Hero) and 25m16s over Mena.

In the SxS category, Nasser Al-Attiyah and Matthieu Baumel, winners of the 2019 Dakar with Toyota, continued to dominate. Despite experiencing a transmission problem in the front of his Can-Am, the Qatari and the Frenchman managed to solve it during the neutralization zone and finished the day without problems.

“It's been a very good experience so far, it's been a long time since we were in a Marathon like this, sleeping in tents, with all the people here together,” he said.