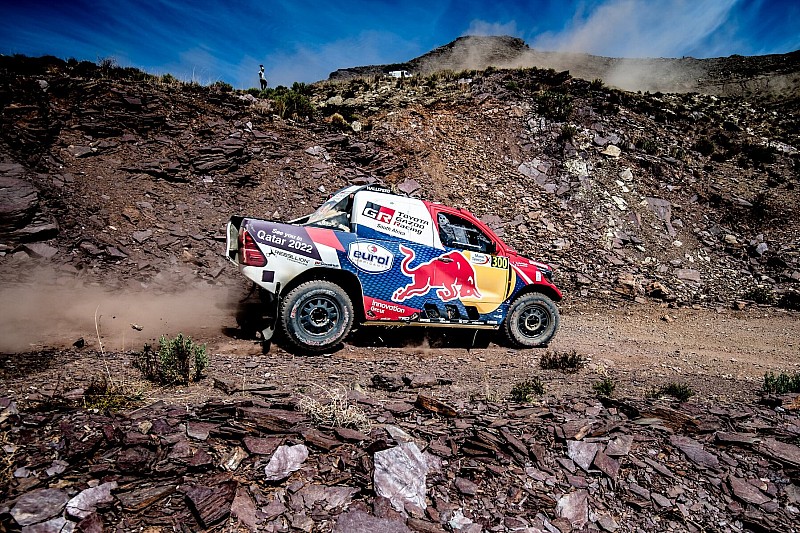 Nasser Al-Attiyah holds the top spot in the Morocco Rally after the conclusion of the first stage on Saturday, as Fernando Alonso’s first true cross-country rally got off to a rocky start.

The first stage of the five-leg event ran for a shortened distance of 226km, after the opening loop of 103km had to be dropped because the reconnaissance car found some solar panels that were not there when the route was designed.

The remainder of the stage featured rocky terrain and all leading drivers lost time after having to change tyres.

2019 Dakar winner and Toyota driver Al-Attiyah ended the day on top, leading the charts by 2m39s from Mathieu Serradori, who was the surprise finisher of the day.

Carlos Sainz was classified eighth, but his X-raid team was adamant that he could have been a minute quicker than fourth-placed Peterhansel had it not been for two punctures, including complete delamination of the tyre thread 50km from the finish.

Peterhansel finished just over five minutes down on Al-Attiyah, with Sainz another 10 minutes adrift of Saturday’s pacesetter.

Like Sainz, Alonso suffered two punctures as he embarked on his first every cross-country rally, in addition to a broken wheel rim.

Alonso’s Toyota made a strong impact with a rock 107km from the finish, leaving the wheel rim heavily damaged and forcing him to wait for help from one of the Overdrive cars.

"It has been a positive day in terms of being able to finish, especially with some moment of doubt, because we had three punctures [including the damaged rim] at one time and we only had two spare wheels," explained Alonso.

"One of the times we punctured, the wheel was blocked and the rim was broken. We were in the dust and we hit a rock. We had to stop another Toyota [Viktor Khoroshavtsev] to ask for help."

"But there were people worse than us, because we were advancing cars, we overtake Nani [Roma], which started in front of us.

"It is only the first day and we hope to continue learning things. It has been an adventure today. We didn't end up in the position that we expected, and now we have to try to depart as soon as possible the next few days."

Matthias Walkner and Toby Price were third and fourth for KTM, while Pablo Quintanilla (Husqvarna) completed the top five.