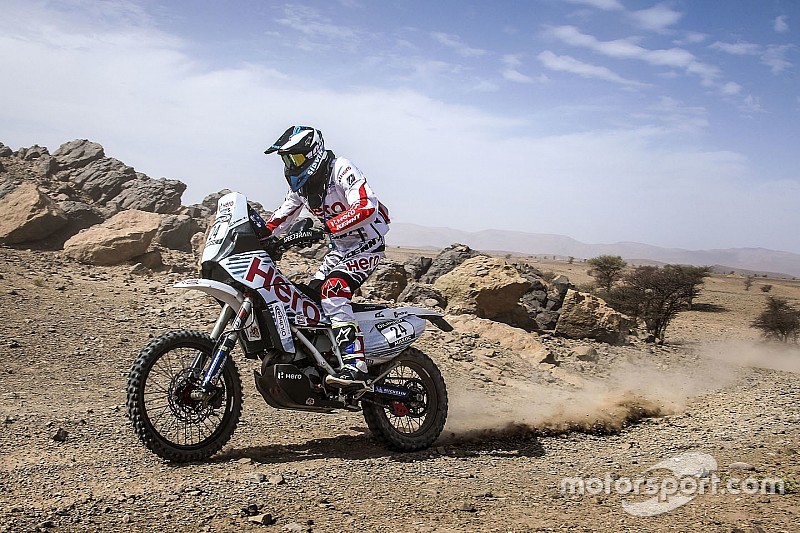 Hero's CS Santosh still remains ahead of TVS Sherco's Aravind KP at the end of the second day of Olibiya Rally in Morocco, with the Indo-French team keeping the lead with Joan Pedrero.

The marathon second stage of the Moroccan rally covered a distance of 291km, running from the ocean side into the dunes on Tuesday.

With just one long stage, divided into six checkpoints, Santosh ended the day with a three place improvement to 26th overall, registering a total time of 4hr30m50s.

The Hero Speedbrain rider showed steady pace to finish each CP inside the top 25, as his teammate Joaquim Rodrigues made major inroads to end 14th overall.

The Portuguese rider was third fastest at the second CP, before he dropped off but still maintaining the top 16 pace.

Meanwhile, Aravind also had a better day ending just 7m39s behind his countryman Santosh at 27th, improving by five places from Leg 1.

Aravind's TVS Sherco teammate Pedrero was still ranked the highest among the two Indian teams at 11th. The Spanish rider though dropped outside the top 10, after an average start to the day.

Lorenzo Sanchez Santolino on the ECM Sherco machinery ended behind Pedrero at 12th making up five places, while Adrien Metge was 17th.

Up ahead, Honda's Paulo Goncalves took the lead from Leg 1's leader Toby Price, who dropped mere 45s behind Goncalves, abode his KTM.