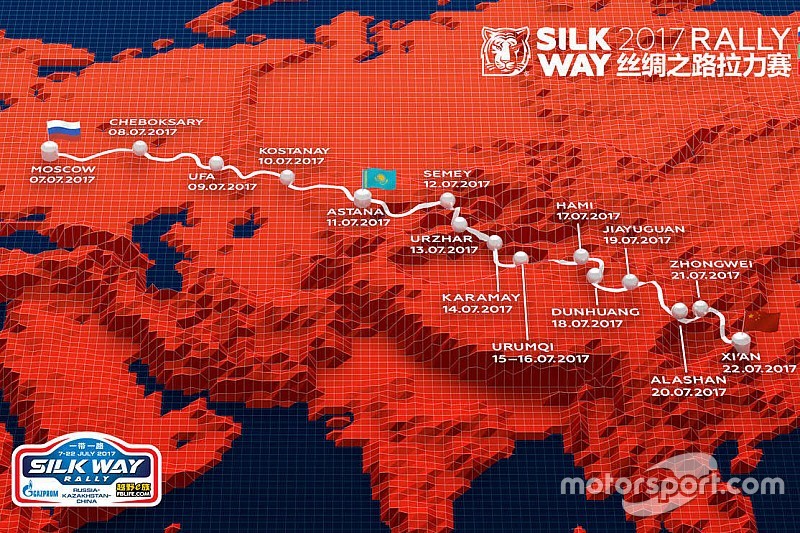 The route for the 2017 edition of the Silk Way Rally has been officially unveiled in Moscow, Russia.

The race, which spans more than 10,000 km, will kick off on July 7 at Vasilevsky Spusk (St. Basil's descent) in Moscow.

The stages will be run in Russia, Kazakhstan and China, which is where the rally will conclude - in Xi'an, on July 22.

The 2017 edition will mark the second time that the rally-raid marathon, which began its history in 2009, will visit three countries.

According to the project director, seven-time Dakar Rally winner Vladimir Chagin, the organisers have done their best to account for the wishes of the participants and have thus extended the length of the timed sections as much as was possible.

Three quarters of the route has been revamped. The longest stage of the 2017 race is measured at 908 km, with a 480 km timed section.

In effect, the route will be comprised of three separate legs: with the Russia section featuring forest roads, the Kazakhstan stages located in the steppes and the Chinese finale heavy on sand dunes.

"This variety is what will be the main challenge of the race," Chagin told Motorsport.com. "In some of the stages, we expect speeds above 200 km/h, while others will feature serious navigational challenges.

"We tried to make a diverse and interesting route and, to do that, we even had to build bridges in certain places.

"I wouldn't say that one of the sections is more interesting than another, as they're all very different. But what I can say with certainty is that the race definitely won't be easier than the previous one.

"It will be key to avoid mistakes in the early days and to build up pace, before you have to tackle the dunes."

Frederic Lequien, the rally's deputy director, added: "We've never ever had such a strong entry list. The Silk Way Rally will feature all the top drivers, co-drivers and teams.

"It will, without a doubt, be a spectacle of the highest order. We're confident our race will be number one in the world."

Toyota driver Nasser Al-Attiyah went as far as to say he preferred the Silk Way Rally to the Dakar.

"The routes have become very samey there," Al-Attiyah said. "But here we've got several different surfaces. And the desert leg is reminiscent of the Africa-based Dakar of old.

"So I'm anticipating the race with great interest. I took part back in 2009 and 2010, but that was still a week-long 'mini-raid' back then. Now it's two weeks, and I'm aiming to fight for victory."

Last year, Peugeot's Cyril Despres won the car category of the event, while the truck class went to Kamaz driver Ayrat Mardeev. The addition of bikes has already been announced, but for 2018.

The 2017 Silk Way Rally will pass through Cheboksary, Kazan, Ufa, Kostanay and Astana.