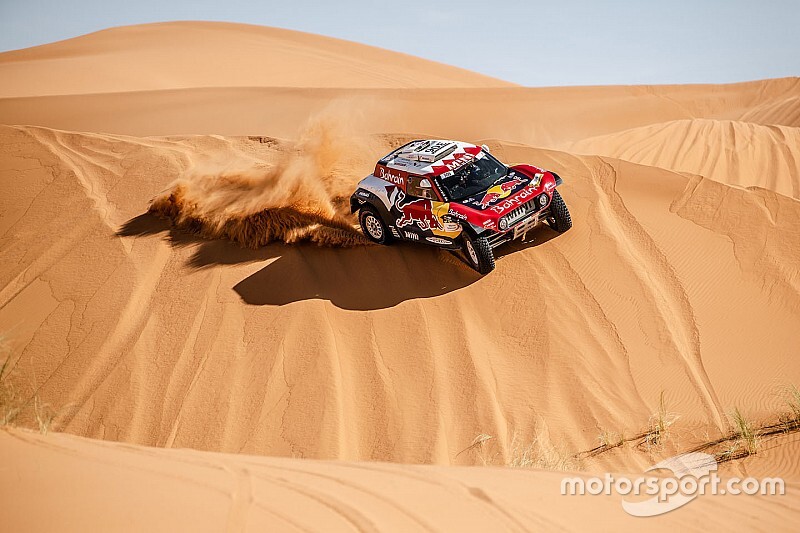 The fourth stage of the five-day event was shortened to 311km from a planned distance of 408km, as non-functioning of one of the helicopters meant organisers weren't able to guarantee the safety of competitors through the entirety of the route.

In a repeat of Monday's Stage 3, X-Raid MINI's Stephane Peterhansel held an early 2m19s lead in the first 64km, before extending that advantage to over four minutes heading into the dune complex.

However, Sainz rapidly clawed back the deficit, moving 1m16s clear before the neutralisation section and eventually winning the stage by 2m36s.

Sainz's second successive stage win came on a dismal day for Toyota's Al-Attiyah, who had been leading the cross-country rally from the onset.

Six kilometres before the entry to the dunes section, Al-Attiyah's Hilux developed technical problems and had to be towed back to the bivouac, virtually ending Qatari driver's chances of repeating his Dakar triumph.

Peterhansel had his own late issues as he dumped his MINI Cooper in a cliff at the 293km, although his buggy escaped any physical damage.

Al-Attiyah and Peterhansel's troubles meant that his Toyota's de Villiers moved into the lead for the first time, after finishing third behind winner Sainz and Jakub Przygonski.

The Spaniard is classified ninth overall heading into the final day of his maiden cross-country rally.

The bikes category also saw a new leader in stage 4, as Husqvarna's Andrew Short seized the top spot amid troubles for the KTM contingent - including Toby Price.

The stage was won by Paulo Goncalves, who joined Indian manufacturer Hero in April this year.