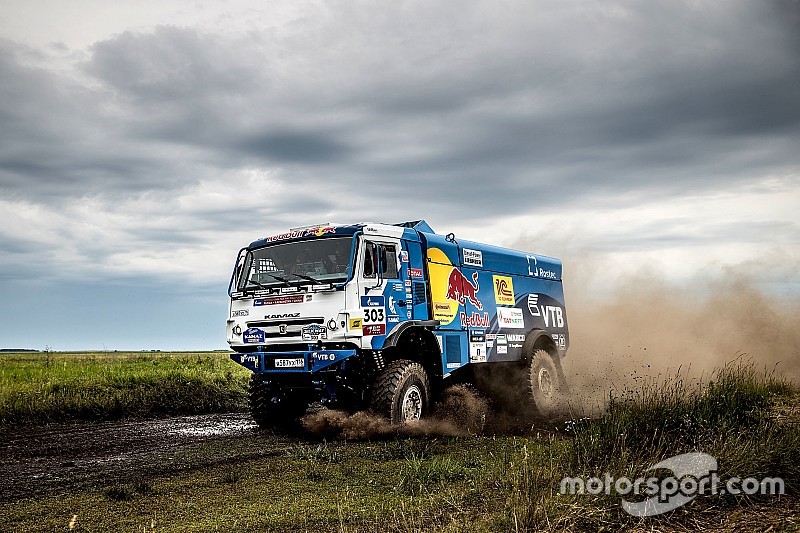 Cyril Despres (Peugeot 3008DKR n°100) took his first stage victory of this 2017 edition of the Silk Way Rally, while in the truck category the Kamaz decided to get on the gas – resulting in a stage win for Dmitry Sotnikov (Kamaz-Master n°303), ahead of his team mates Shibalov and Nikolaev. Cars and trucks combined this 5th stage to Semey, to the far east of Kazakhstan, saw the Blue Armada put three of their trucks in the top 5…

Starting in 18th place this morning, Cyril Despres and David Castera (Peugeot DKR3008 n°100) knew they were taking a big risk in deciding not to play one of their three jokers that would have allowed them to start in a more favourable position. Principally the risk of spending long minutes stuck behind slower competitors.

A risk that, in the end, paid off handsomely, with the title holders taking their first stage on this 2017 edition and in the process backing up Loeb’s overall lead for Team Peugeot.

Second on the day’s special, the Chinese driver Yangui Liu, gives the Chinese manufacturer Baïcmotor their best result on the Silk Way rally.

Once again starting first, Sébastien Loeb (Peugeot 3008DKR Maxi n°104), finished fifth at 17m40s, a time explained both by the difficulty in opening the piste in the high grass and the desire to manage his substantial lead over Despres (2nd at 50m16s).

Menzies got back onto the overall podium at the expense of Frenchman Lavieille. Starting 11th this morning, after a long night for his mechanics repairing his car, Peterhansel once again ran into problems. Forced to stop around CP3 (km 385) he lost another 50 minutes overall…

T2 category: Miura in a hole

For the Japanese driver Akira Miura and his French team mate Laurent Lichtleuchter (Toyota Land Cruiser n°133) this 5th stage was nearly game over. After falling into a hole 50 km from the finish, they seriously damaged the front of their car, yet nevertheless managed to make it to the end of the special.

An excursion that cost them 40 minutes and gives their main rival and class leader, the Australian Adrian Di Lallo (Isuzu MU-X n°135), an almost comfortable margin.

Playing a low profile since the start in Moscow, last Saturday, the Kamaz choose this first long special to get on the gas. A decision that saw Naberezhnie Tchelny’s blue monsters take the first three places on the day. Winning ahead of Shibalov and Nikolaev, Dmitry Sotnikov (Kamaz-Master n°303) also takes the overall lead 48 seconds in front of Anton Shibalov (Kamaz-Master n°312) and 15m27s ahead of the Czech driver Kolomy (Tatra Phoenix 311), who lost more than 50 minutes after getting stuck on the going.

The day after their fellow countrymen’s disastrous run of bad luck that saw all three Team Mammoet / Riwald trucks out, it was the turn of Team De Rooy Iveco to suffer. Starting second today, Gerard De Rooy (Iveco Powerstar n°302) was forced to leave the special at CP2 (Km 260) when his cabin chassis broke.

Team mate, the Kazakh driver Artur Ardavicius (Iveco Powerstar n°310), managed to finish the stage but only after giving away nearly an hour to Sotnikov after getting stuck.