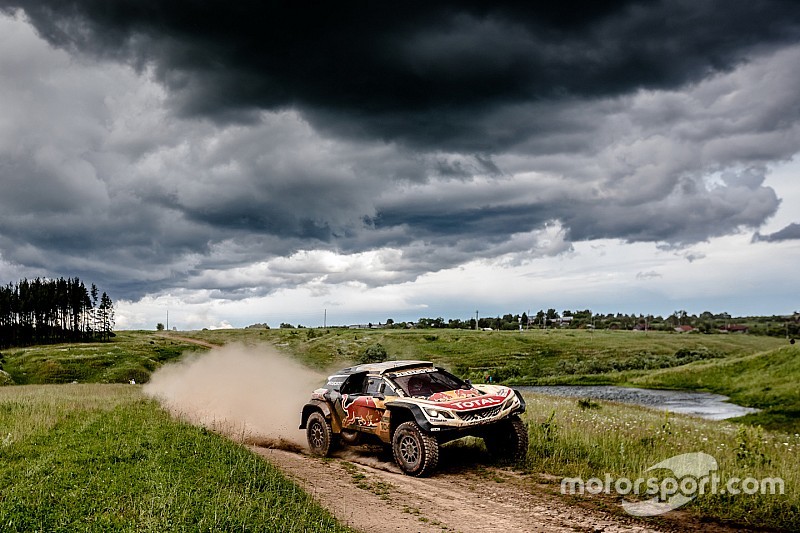 Stéphane Peterhansel (Peugeot 3008DKR n°106) and Martin van den Brink (Renault Sherpa n°301) win in the car and truck categories. In the process the Frenchman and the Dutchman both take the overall lead in their respective categories.

Not such a good day however for the Saudian Yazeed Al Rajhi (Mini John Cooper Works n°101), who went off the track 34 km from the finish line, giving away at least 2 hours in the process.

Australian Adrian Di Lallo might not be so used to driving in the rain but the Isuzu MU-X pilot carried on today as he started out yesterday and maintains his No 1 spot in the T2 category reserved for production based cars. He leads the factory Toyota Land Cruiser of the Toyota Autobody team, driven by the Japanese pilot Akira Miura, by more than 5 minutes overall. The Kazakh Chernenkov (Nissan Patrol n°136), takes third place both on the special and overall.

It was Martin van den Brink (Renault Sherpa n°301) and Gerard De Rooy (Iveco 4x4 DRNL n°302) who led home the Silk Way Rally truck race on today’s second stage. Taking advantage of a certain amount of over-enthusiasm from the Tatras of Kolomy and Loprais, as well as Viazovich in his MAZ, all of whom made errors on this particularly tricky special, the Dutchmen came out on top. And while van den Brink took 2m04s off De Rooy on the stage, overall he is only 13 seconds ahead of his countryman. The Kazakh Ardavicius (Iveco 4x4 DRNL n°310) takes the third spot just ahead of the first Kamaz of Anton Shibalov (n°312) and

Dmitry Sotnikov (n°303). Yesterday’s stage winner, the Czech Martin Kolomy (Tatra n°311) gave away 11m30s and goes down to 5th place overall. Peanuts compared to the 56 minutes lost by Siarhei Viazovich (Maz n°304). Ales Loprais (Tatra n°305) had an even worse day and at the time of writing is still stopped at km 122 of the special, more than two hours after his rivals crossed the finish line…