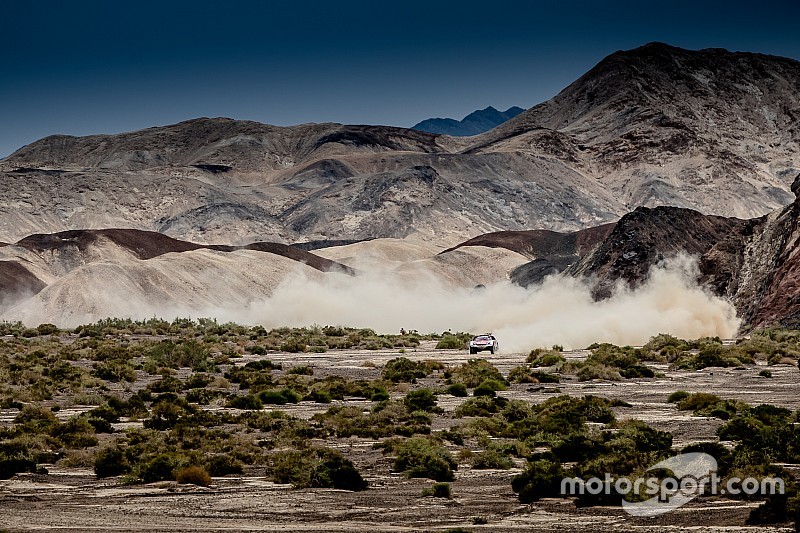 Christian Lavieille (Baïcmotor n°108) in the cars and Ayrat Mardeev (Kamaz-Master n°300) in the truck category win the 12th stage of the Silk Way Rally, run in the heart of the big dunes of the Gobi desert. Despite mechanical problems and time lost in this very demanding special, Cyril Despres (Peugeot 3008DKR n°100) and Dmitry Sotnikov (Kamaz-Master n°303) hold onto their leadership positions in the overall rankings.

In the lead at CP2 (km 122), before attacking the big dunes of the Gobi Desert, with Stéphane Peterhansel shadowing him in his role as rapid assistance, Cyril Despres was looking forward to having fun in the sand. Instead his power steering packed up and he lost 20 minutes wrestling with the steering wheel of his Peugeot buggy.

Luckily for the Frenchman, Bryce Menzies (Mini John Cooper Works n°105), his nearest rival overall, went completely off the route when he overtook Despres at the front of the race and lost even more time going back to find a waypoint. In the process the American slips down from 2nd to 4th overall.

One of the main beneficiaries of the frontrunners’ problems was Christian Lavieille (Baïcmotor n°108) who started far back this morning to drive a perfect special. The ex-double world motorcycle endurance champion and recent winner of the Taklimakan Rally, takes his first stage victory on the race, just 19 seconds ahead of the Geeley SMG buggy of the Chinese driver Liu Kun and moves up one crucial place from 4th to 3rd in the rankings.

Third on the stage the other Geeley SMG buggy of Han Wei also benefitted from Despres and Menzies’ problems and moves up to 2nd overall, 43m22s behind leader.

For the Kamaz-Master armada the objective of this 12th stage was perfectly clear: to counter the charge of Kolomy and his Tatra, that until now was stubbornly holding onto their 3rd place overall. Starting first on the road this morning, after yesterday’s victory, the Czech driver didn’t hold onto the lead for very long.

Yet it wasn’t the Kamaz that were the cause of his problems, but like Despres, a problem with his power steering that bought his Tatra Phoenix n°311 to a halt in the middle of the dunes. More than enough to encourage Ayrat Mardeev (Kamaz-Master n°300) to get on the gas.

The winner of the 2016 Silk Way Rally 2016 nevertheless took the time to pull out Sotnikov, his leader, losing power and stuck on the crest of a dune. At the finish Mardeev takes his 2nd stage win, 2m15s ahead of Shibalov.

Coming back respectively to 3m04s and 17m54s to Sotnikov overall, both can still hope for final victory in Xi’An. All of which promises a great battle between team mates tomorrow in the dunes of the Tenger desert, as beautiful as it is redoubtable…

Silk Way Rally: Despres and Sotnikov at the gates of Xi’an