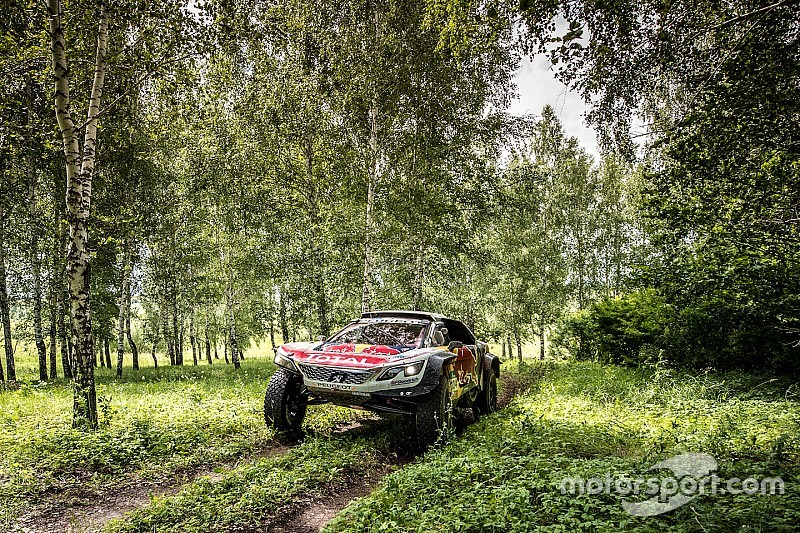 While Sébastien Loeb (Peugeot 3008DKR Maxi n°104) takes control of the car category at the end of the 3rd stage, in the trucks the Belorussian Siarhei Viazovich won his first special stage in rally-raid aboard his factory MAZ.

Opening the piste for his team mates yesterday, Sébastien Loeb (Peugeot 3008DKR n°104) attacked from beginning to end on this third, 324 kilometre long special. Early in the day the terrain was once again treacherous, with numerous water crossings, but the conditions didn’t appear to slow down the nine times World Rally Champion, who charged after his team mates, before overtaking them mid-way through the special.

Second today, Peterhansel (Peugeot 3008DKR 106) ended up giving away 4m34s to Loeb and is this evening 3m15s behind overall.

The big surprise of the day came from the Chinese driver Zhou Yong (Toyota Hilux Overdrive n°116), who started way back in 39th place this morning, but worked his way through the field to finish in an almost incredible 3rd place, knocking Cyril Despres (Peugeot 3008DKR n°100) off the day’s podium in the process. Stuck for nearly 8 minutes, the Frenchman lost almost 15 minutes to the leader in total but nevertheless preserves his third place overall, comfortably ahead of Menzies, with the American’s team mate Al Rajhi (Mini John Cooper Works n°101), who started 11th this morning, completing the top 5.

In the T2 category, after two stages dominated by the Australian Di Lallo (Isuzu n°135), it was the turn of the Japanese driver Akira Miura (Toyota Land Cruiser n°133) to shine. Winning the special by a comfortable margin, the Team Toyota Autobody entrant now leads Di Lallo by 10 minutes. Third on the stage and overall, the Kazakh driver Chernenkov (Nissan n°136) gives away more than 50 minutes.

After having nearly taken victory on three previous occasion, thanks to their driver Siarhei Viazovich, the factory MAZ team from Minsk finally realised their dream of winning a rally-raid special on this 3rd stage of the 2017 Silk Way Rally.

Second, less than a minute behind, the Czech driver Kolomy (Tatra n°311), Saturday’ winner, takes the overall lead, ahead of a trio of Kamaz led by Anton Shibalov (n°312) ahead of his team mates Sotnikov (n°303) and Mardeev (n°300). Discreet up until now, the Kamaz look ready to pounce.