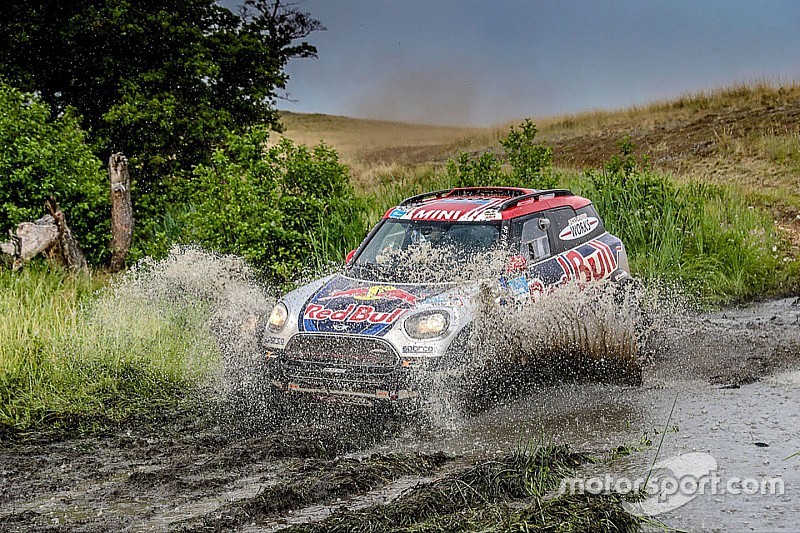 It was the American Bryce Menzies’ (Mini John Cooper Works n°105) turn to win his first special this morning on this 7th stage of the Silk Way Rally 2017, just before the entire rally caravan crossed over the border from Kazakhstan to China. In the trucks it was the overall leader, the Russian Dmitry Sotnikov (Kamaz-Master n°303), who took his second stage victory on this short and dusty 106 kilometre special.

Since leaving Moscow almost a month ago the Peugeots have reigned supreme, leaving just the crumbs for their rivals. That domination came to end today ‘thanks’ to Americans Bryce Menzies and Peter Mortensen (Mini John Cooper Works n°105).

Starting 18th, the X-Raid drivers were able to take advantage of the opening skills of Cyril Despres and David Castera (Peugeot 3008DKR n°100), who started just ahead of them. Better still, with the Armada of Kamaz-Master who went through just a little earlier, the high grass of the first half of the special had already been cut down to size to facilitate this ‘Made in USA’ victory.

Despres posted the second fastest time of the day, six seconds ahead of Sébastien Loeb (3rd), who nevertheless maintains a comfortable lead. Waited for by Peterhansel at the start, Loeb and Elena thus opened the special, but avoided the dust, to keep their team mate / rivals over an hour behind in the rankings (1h03m35s).

For his part Menzies sures up his 3rd place, ahead of the Chinese driver Han Wei (Geeley SMG Buggy) and Christian Lavieille (Baïcmotor n°108).

After playing second fiddle to Muira and DiLallo, it was the turn Chernenkov to win the production based car class – a fine way for the Kazak competitor to say goodbye to his homeland. He came in just over 20 mins ahead of his Australian rival who nevertheless possesses a very comfortable margin overall.

Trucks: Kamaz to the power of 4

Another quick special for the trucks with the overall leader, Dmitry Sotnikov (Kamaz-Master n°303) taking his second stage win with an average speed of 96 kph at the finish line. And that despite, according to Silk Way Rally adviser Luc Alphand, who opened the piste this morning two hours before the first competitor, the terrain being much less suited to ‘corner cutting’.

With Shibalov, Mardeev and Nikolaev coming in behind him, the Kamaz-Master team would have been hard pushed to do better.

Fifth on the stage but just 2m34s behind Sotnikov, the Czech Martin Kolomy (Tatra Phoenix n°311), attacked hard on the track today to stay in touch overall and this evening is in 3rd place, 15m27s behind the leader and less than 13 minutes from Shibalov.