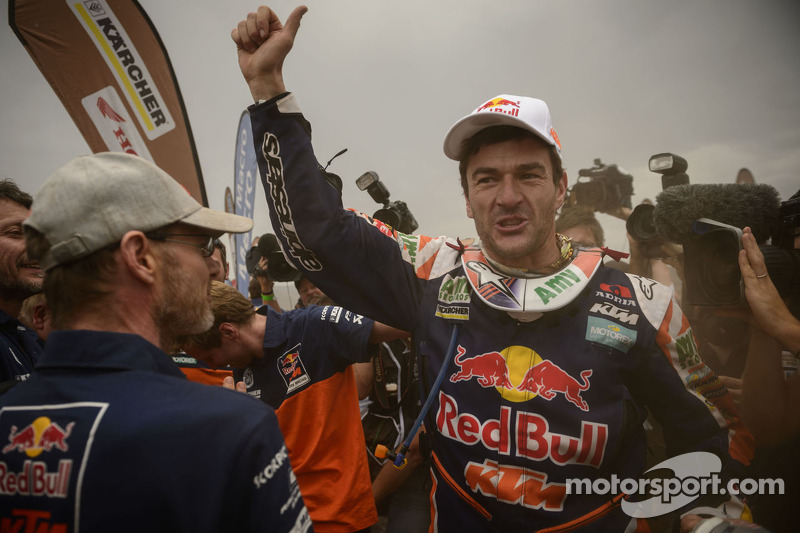 What to expect from the Sealine Cross-Country Rally...

Intense heat, wind and dust, coupled with tricky navigation and varied landscapes make this one of the most challenging events of its kind on the planet and a crucial test event for competitors keen to prepare for the next Dakar Rally.

Both car and motorcycle categories will not only feature the fight for individual glory, but also the battle between manufacturers for pride of place at the top of their respective championship classifications. Mini takes on Toyota in the car category - through the X-raid and Overdrive Racing teams – and Team HRC Rally (Honda) lines up against the Red Bull KTM Factory Team in the two-wheel category.

Nasser Khalifa Al-Attiyah, the president of the organising Qatar Motor and Motorcycle Federation (QMMF) and FIA vice-president for sport MENA, hosted a series of three press conferences at Losail on Sunday afternoon, once the leading teams had completed their scrutineering and documentation checks.

“I would like to welcome all our competitors to Qatar for the start of what we hope will be another safe and successful Sealine Cross-Country Rally,” said Nasser Khalifa Al-Attiyah, who held a minute’s silence during the motorcycle press conference for the Dubai-based British rider Cameron Waugh, who lost his life in an accident at the Abu Dhabi Desert Challenge two weeks ago.

“Our entries have strength in depth and we look forward to five days of exciting competition on the challenging route that our team at the QMMF has devised.”

The host nation will be hoping that the talented rider Mohammed Abu Issa is able to match and beat Polish rival Rafal Sonik in the quad category. “For sure, the experience I gained at the Dakar Rally will stand me in good stead, but Rafal (Sonik) is also very experienced in the Middle East and it will not be easy to beat him,” said Abu Issa.

“The Abu Dhabi Desert Challenge was disappointing me with the engine problem and it cost me a lot of points towards the championship,” said Al-Rajhi. “Now I am back with the Toyota team. I won with them in Russia and Italy. The objective is a podium and to get back into contention for the championship. It’s a busy time for me with the Jordan Rally next week and then Argentina the week after.”

The QMMF president also received a special award from Marat Abykayev, the Kazakh FIA and FIM president, who is head of a visiting delegation from the central Asian country. Al-Attiyah then presented gifts to both Abykayev and Abdul Salem Abu Issa of the Salam International Group for their support. The 2001 Dakar Rally winner Jutta Kleinschmidt and her former Italian navigator Fabrizia Pons have been chosen to run as the route verification team. The German became the first and only woman in history to win the Dakar with the Mitsubishi Ralliart team and she will pass through each stage in advance of the entrants to check the accuracy of the road book and to ensure that weather conditions haven’t caused any major changes to the terrain.

Tomorrow (Monday), motorcycles leave the start podium at Losail from 10.00hrs and begin the opening 164.18km selective section from 11.30hrs.

Cars follow over the podium from 11.15hrs and commence the stage, which finishes 2.21km from the Sealine bivouac, at 12.45hrs. The event finishes at Sealine on Friday afternoon.

There is a passage control immediately before the cars and bikes cross the tarmac road. It is possible to see the competitors for almost 500 metres on a track parallel to the asphalt before they turn left and pass a bridge over a pipeline.