Carlos Sainz says early Dakar leader Nasser Al-Attiyah has emerged as a 'clear favourite' from the first 84 competitive kilometres of this year's event. 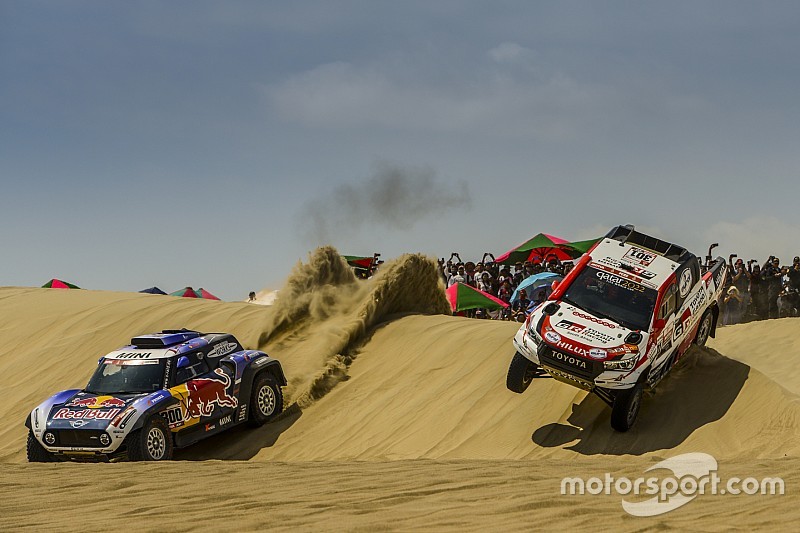 Al-Attiyah made light work of the opening stage of the 2019 Dakar, running second through the dunes behind Sainz before catching the Spaniard's Mini Buggy with around 15 kilometres to go.

The Toyota driver will take a 1m59s lead into tomorrow's second stage.

While admitting that he's happier running behind Al-Attiyah tomorrow, Sainz says the first day of running has proven just how difficult both the experienced dune racer and the Toyota HiLux will be to beat on outright, mistake-free pace.

"The section has been similar to the area we did last year at this stage, so we knew what we were going to find," said Sainz. "We have been calm, since we did not want to open tomorrow.

"Tomorrow is already a day to push. But the truth is that I see the Toyotas quite strong.

"Al-Attiyah is the clear favourite, he is in the courtyard of his house. Although it is true that last year he made a couple of mistakes and showed that he is not infallible in this terrain."

The Qatari driver claimed that he too wasn't pushing 100 percent on his way to the first stage win, with his focus on his own pace rather than Sainz and the chasing pack.

"Today was a good day. We won the stage [but] we didn't really push," he said.

"I'm happy with the car and the BF Goodrich tyre, it's a new tyre for this Dakar. It looks like it's going really well.

"I caught Carlos in the last 15 kilometres, but I stayed behind him. I just needed to keep my speed, because it doesn't change, one minute or 10 seconds, it's the same.

"The plan was to just make good speed. I saw I won the stage with a good time, and I'm happy. Tomorrow I will do the same. If I lose time or I win, it will be perfect."

Iveco shadows Kamaz as Dakar kicks off for trucks