For some the dunes of Dakar are a blessing. For most, they are a curse. Nasser Al-Attiyah is one of the few that sees them as the former, and thus used the high ridges of today’s Pisco-Nazca route to take his 15th career Dakar stage win. Meanwhile, Francisco Lopez took his second win in three days in the Bikes category in similar dune-bashing fashion.

"The sand was very soft today and I decided not to go flat out because the car's very new and we still don't know how far it can go. No problems so far," said Al-Attiyah.

The day began with a change in the Cars category lead even before the first vehicles set off. Qatar Red Bull buggy pilot Carlos Sainz’s protest over his GPS malfunction yesterday lead race officials to restore the time he lost searching for a faulty electronic waypoint. The bonus put Sainz at the top of the timesheets and ahead of Stéphane Peterhansel for the start of the third stage.

But there the Spaniard’s luck ended. His run was plagued with electronic issues and he eventually came in tenth fastest, while just minutes earlier Al-Attiyah had won the stage in the other buggy. Less than ninety seconds behind first place was Robby Gordon, charging back from a deficit of almost an hour in his Hummer after a terrible start to the rally—a broken transmission and many navigational errors. But the big name on the bottom of the podium was Stéphane Peterhansel, who snatched back the overall lead within hours of losing it to Sainz. 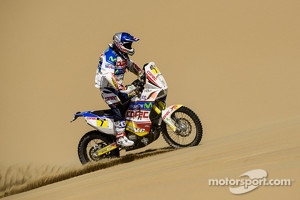 Though Qatari native Al-Attiyah temporarily prevailed in the sands, it was veteran Peterhansel who has truly taken to Peru’s dunes and pulled out a lead of more than six minutes, forcing the buggies in second and third on the pursuit.

As the bright green Mini All4 Countryman came home third, though, and the orange and yellow entries, too, finished the day in the top ten, the white machine never appeared in Nazca. Its driver Krzysztof Holowczyc apparently launched it off of a dune and crashed on landing, retiring the car and sustaining minor injuries to his ribs and back. Co-driver Felipe Palmeiro was unhurt, but the X-Raid team has lost an important quarter of its four-Mini main effort.

In the Bikes category Day Two leader Joan Barreda started first to cut a trail in the virgin sand and thus lost twenty minutes simply navigating the route. Starting far down the order after a tough second stage, Francisco Lopez wasted no time on his roadbook and instead followed tracks at top speed, pushing hard all the way to Nazca and arriving faster than anyone else. His KTM was followed by Paulo Gonçalves’ Husqvarna, but, like in the Cars category, it was the third place finisher who made the biggest impression in the standings; Cyril Despres now leads the Bikes overall. Lopez is behind him in second, with Pal-Anders Ullevalseter in third thanks to a string of steady finishes. Both know that it will be tough to usurp Despres, though, now that KTM’s star is in his favorite position.

In American news, Marc Coma’s substitute rider Kurt Caselli brought his KTM to 34th on the day and lies 20th overall, while Baja legend Johnny Campbell is 137th in the general standings.

Lopez commented: "I focused on navigating and finding the waypoints, and everything went well. But tomorrow's stage will be different at the front of the race, so I'm taking things one day at a time." 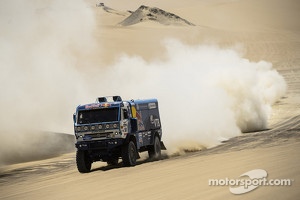 The Trucks category is now home to the most successful driver of Dakar 2013, as Gerard de Rooy has still won every stage of the race and further extended his lead over Ales Loprais today. The former stood atop the Day Three podium with Iveco colleague Miki Biasion at the bottom—the two separated by Eduard Nikolaev, finally making an appearance in his Kamaz. Though he arrived in Nazca fourth, Loprais still chases de Rooy most closely, and will push his yellow Tatra hard in the coming days to overtake.

De Rooy said, "...you can't rule out anybody yet, and I continue drive really carefully to avoid the slighest mistake. This is what the challenge is all about: driving fast but within your limits."

Quads was again led by Marcos Patronelli, himself again shadowed by Sebastian Husseini, though the Argentine Patronelli finished out the stage on a deflating tire! Those two, divided by less than four minutes, still ride almost thirty minutes ahead of their nearest pursuer. "I'm happy with the stage. I feel fine. The quad's in perfect working order. It was a great day," Patronelli said.

Tomorrow’s stage to Arequipa will see the competitors face dunes and sand flats again, but also return to the Pacific Ocean. The Bikes must also tackle a steep descent of over a mile, while Mini pilots Stéphane Peterhansel and Nani Roma will surely remember the scares they got stuck in sand valleys while leading the 2012 race just days from the finish! Nazca-Arequipa’s 178 miles of special stage will determine the next step of Dakar 2013.