Alonso has "exceeded all kinds of goals" in first Dakar 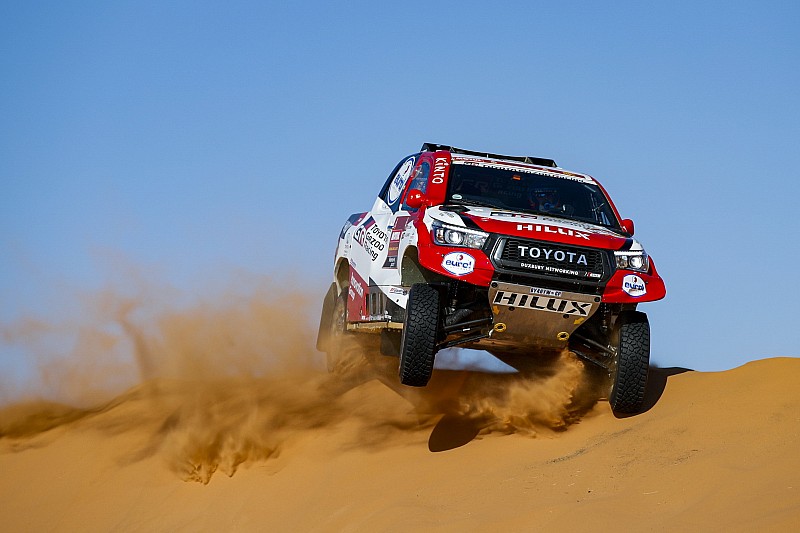 Fernando Alonso says he has already "exceeded all kinds of personal goals" for his first Dakar Rally, after taking second place in the eighth stage of the marathon.

Alonso finished four minutes behind surprise stage winner Mathieu Serradori in the 477km timed special, as usual frontrunners Carlos Sainz, Nasser Al-Attiyah and Stephane Peterhansel had a more difficult time being the first three drivers in the running order - not aided by the lack of bike tracks to follow given the cancellation of their stage following the passing of Paulo Goncalves on Sunday.

The Monday result leaves Alonso 13th in the overall classification, but just four minutes off a top-10 position, and suggests he could've potentially fought for best of the rest behind the three leaders if not for his lengthy stop for repairs in the second stage.

The two-time Formula 1 champion says he could not have anticipated these kinds of results, given that he was not nearly as competitive during preparation events such as the Morocco Rally in October.

"I've not just fulfilled but exceeded all kinds of personal goals I may have had before the Dakar," Alonso said.

"In Morocco I felt comfortable but I was 15 minutes from the leaders in 250-kilometre stages. I didn't know if in the Dakar I would be half an hour behind the biggest [cross-country] specialists, and being close to them on days like this, even ahead of them, was not in any of my sensible goals."

Alonso said the Monday result in particular brought "great joy" to himself and his co-driver Marc Coma.

"We saw the times on the road section [after the timed special] to get to the bivouac, and the truth is that we were almost pinching each other as we barely believed that everything had gone so well," he recalled.

"The stage went smoothly. We had a puncture at 350km, more or less, but I don't think it made much difference.

"For us in the team, for Marc and me in the car, these are moments of great joy, of emotion, because we know how difficult it is, what we experienced there over 470 kilometres - the dunes we passed, the scares - and then when you cross the finish line and you are among the best, it is a great joy.

"And to remember where we came from [a few months ago], we didn't even know how to start the car practically."

Alonso hopes to capitalise on his "good momentum" in what he expects to be a very challenging run-in to this Dakar.

"I had the experience of a test in Abu Dhabi three weeks ago and it was a similar area of dunes [to what we're expecting," he said.

"It was very difficult and it was three days of hell - if these ones are similar to the ones in that area, there will be a lot happening."