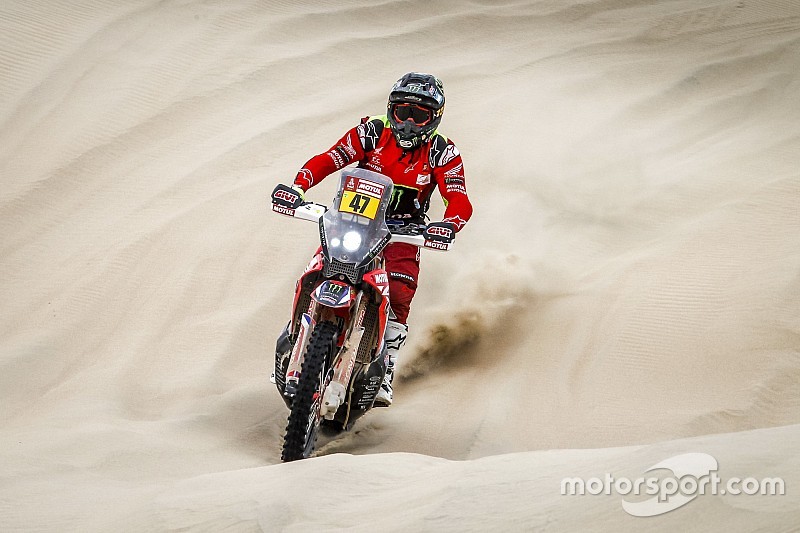 A three-hour penalty for Honda rider Kevin Benavides in the 2019 Dakar Rally has been overturned, nearly two months after the event concluded.

Benavides, who led Honda's two-wheeled Dakar assault after Ricky Brabec's engine failure and early exits for Joan Barreda and Paulo Goncalves, was given a three-hour penalty after Stage 7.

It was issued for carrying additional route notes, which the series deemed to be against the rules and also "unsportsmanlike behaviour", but Honda appealed against the decision.

Having revealed that the rules clarifying carrying extra notes were added to the regulations a day before Benavides was penalised, and were only published afterwards, the Argentinian's penalty was withdrawn.

Article 17P2.3 of the regulations was modified after Stage 2, which specified "the addition of any information in the roadbook – CAP (heading), geographical indications, distance or GPS points – different from the one that the road book itself carries and to which the previous inspection team offers is strictly prohibited".

Another change was made on the same day Benavides received his penalty, adding that notes can't be carried "in the machine or in any part of the body or clothing of the rider".

A statement released by Honda said: "The TNDA [Disciplinary and Arbitration Court of the French Motorcycle Federation], after having weighed up the different statements presented to the Tribunal National de Discipline et d’Arbitrage, ruled in favour of the Argentinean, outlining that Kevin Benavides had in no way violated race rules."

"Paragraph 3 of Article 17P2 had been replaced with a new paragraph, dated January 8th 2019 at 18:30, with an additional text also added on January 15th, indicating “the prohibition of adding additional notes on the motorcycle, in the rider’s kit or on any part of his body or any other means of support”, which was published after the rider had already received the 3-hour sanction."

The change promoted Benavides from 12th to fifth in the classification, but still 41m14s behind winner Toby Price.