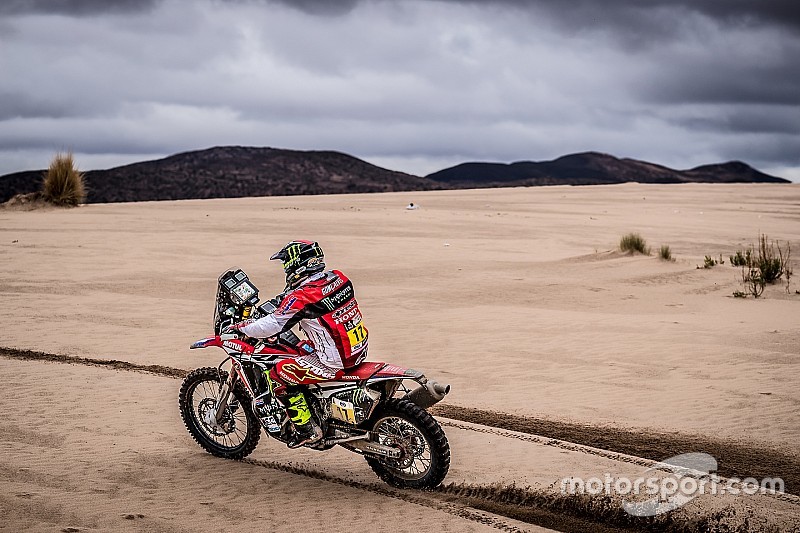 Paulo Goncalves took his first stage win of the 2017 Dakar Rally on the event's penultimate test, as Sam Sunderland maintained his advantage at the head of the standings.

The second-to-last stage of the event, running from San Juan to Rio Cuarto, featured a 288km timed section split by a lengthy neutralised zone.

Honda rider Paulo Goncalves held a 30-second advantage over Yamaha's Adrian van Beveren at the end of the first timed section, and the Portuguese rider stretched his advantage in the latter half of the stage.

He was able to stave off a late challenge from teammate Joan Barreda to clinch his first stage win of the rally - and the third of his Dakar career - by a margin of 1m09s.

Overall leader Sunderland had a late scare when he stopped for several minutes, but the works KTM rider still managed to finish within 7m25s of Goncalves.

With nearest rival Matthias Walkner (KTM) also losing time, Sunderland will begin Saturday's final stage of the rally with an advantage of 33m09s over the Austrian as he seeks to clinch his first Dakar title.

Goncalves has also moved up to sixth at the expense of Pela Renet (Husqvarna), and lies 52 minutes away from the top spot.

UPDATE: Barreda was later handed back three minutes by the stewards after spectators not respecting the spectator zones meant he got lost.

It means he wins the stage instead of teammate Goncalves, making it the Spaniard's fourth win of the rally and the 18th of his Dakar career.

Loeb: Victory "won't be possible" without problems for Peterhansel