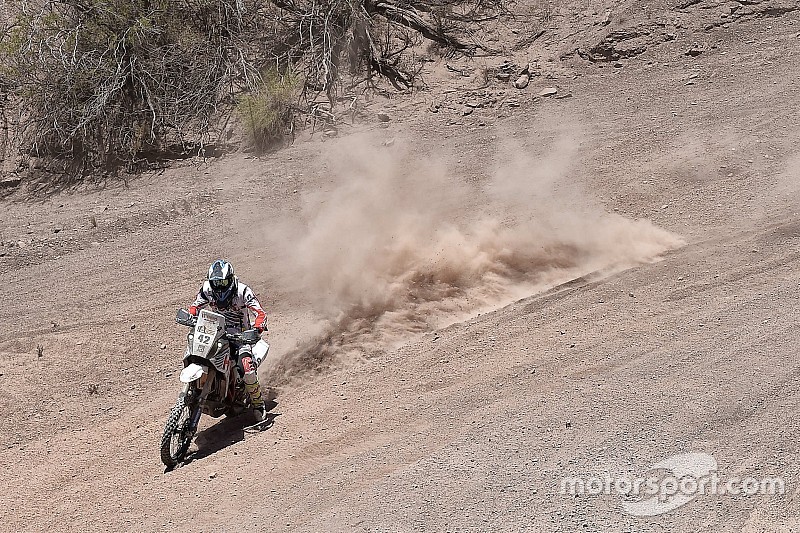 The penultimate stage of the 2017 edition of Dakar Rally featured a timed section of 288km from San Juan to Rio Cuarto in Argentina, covering a total distance of 795km.

Santosh had a slow start to the day, dropping few positions in the first two way points, before the Indian steadied his Speedbrain 450 to finish 50th in the stage.

Having gained nine places in the last stage, the Bangalore-born rider had further advancement to break inside the Top 50, ending up 48th overall.

Hero teammate Joaquim Rodrigues was consistent all day long finishing 14th in the stage. The Portuguese rider, therefore improved by four places to be 10th in the overall standings.

It was the second time for Rodrigues to get himself in the Top 10, after having made it, in Stage 8. He sits 2hr20m53s behind leader Sam Sunderland in the KTM.

Over at the TVS Sherco camp, Joan Pedrero showed his experience after a modest 10th stage. The Spaniard survived a fall at the start of Stage 11 to finish 11th, ahead of teammate Adrien Metge.

In the overall standings, Pedrero improved by three places on his RTR 450 to sit 13th, over two and a half hours from Sunderland.

Metge also made up three places to be 23rd, after the Frenchman came back from a heat stroke which led to a dehydration situation on Thursday.