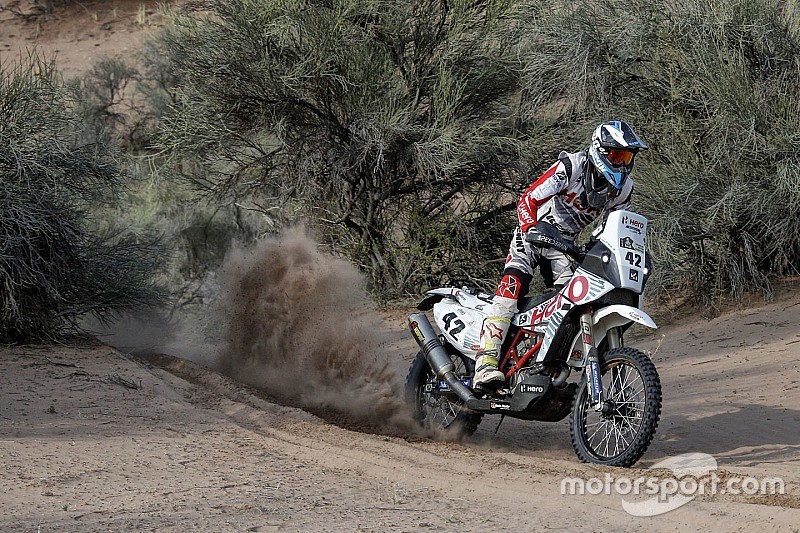 Hero MotoSports Rally Team's duo and TVS Sherco's remaining two riders successfully crossed the finish line in the 2017 edition of the Dakar Rally, after the end of the final stage on Saturday.

The route from Rio Cuarto to Buenos Aires was the final chance for the riders to make any improvement, as they made their way towards the finish line after 12 days of action.

With only 64km of timed section in a total distance of 786km, all four riders in the Hero and TVS Sherco teams made it safely to the chequered flag to complete the grueling rally.

India's CS Santosh finished the Stage 12 in 45th position, therefore making one place in the overall standings to end up 47th with a total time of 42hr01m16s on his Speedbrain 450.

The Bangalore-born rider incurred a total of 1hr20m penalty in the rally and was 9hr54m54s behind the eventual winner KTM's Sam Sunderland.

This was Santosh's second Dakar finish after the Indian had completed the rally in 36th, on his debut in 2015 abode the KTM.

His rookie teammate Joaquim Rodrigues had a great first outing in the world's biggest cross-country rally, finishing 20th in the stage, while ranked 10th overall.

It also made for a double finish for the Indo-German collaboration in their maiden attempt as a team, with one bike even managing to finish in the Top 10.

In a three-team attack, the Indo-French squad lost its rookie Indian rider Aravind KP in Stage 3 after his second fall, but the two remaining riders fought all the way to finish the rally.

The more experienced Joan Pedrero was 15th in the final stage to end up 13th overall, finishing over two and a half hours behind Sunderland on the RTR 450.

The Spaniard's consistency helped him finish inside the Top 15, a much required result for him after a retirement from the 2016 edition. He also gave TVS Sherco its first win in Stage 1 this year.

Meanwhile, teammate Adrien Metge had a fruitful outing after a dismal start to the rally. The Frenchman suffered a fall in the early stages to drop well outside the Top 100 at one time.

Metge, then, made steady improvement stage after stage to finish 22nd overall. He was 18th in Stage 12 of the rally.

Peterhansel admits Dakar win down to experience, not speed