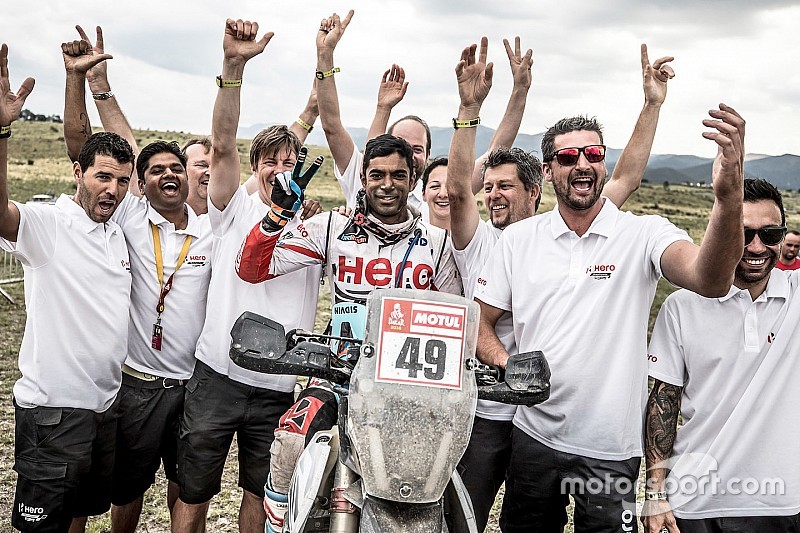 India’s CS Santosh secured a career-best 34th place result in the 2018 Dakar Rally, while teammate Oriol Mena allowed Hero to outclass Sherco TVS in the battle among the Indian manufacturers.

Saturday’s 120 km stretch around Cordoba (Argentina) made up the shortest stage of Dakar since the opener, giving competitors little time to gain or lose places.

Santosh capped off his fourth Dakar attempt by finishing the final stage in 32nd place, 18m45s down on stage topper and Honda rider Kevin Benavides.

He was eventually classified 34th in the final order, two places higher than what he managed in his maiden attempt in 2015.

It was also his third classified finish in Dakar, with 2016 being the only year he failed to reach the chequered flag.

Meanwhile, Hero’s rookie Mena more than made up for the retirement of teammate Joaquim Rodrigues, finishing in an incredible seventh place.

More impressively, he finished only 2hr22m52s behind overall bikes winner Matthias Walkner, as he notched up Hero’s first top-10 result in its brief two-year history in Dakar.

Over at Sherco TVS, Joan Pedrero, who was forced to carry the baton for the Indo-French partnership alone after early retirements for Adrien Metge and India’s Aravind KP, just missed out on a top-10 finish.

The Spaniard was ranked 11th in the order, less than three minutes behind 10th-placed Jose Ignacio Cornejo Florimo.

Update: Santosh was eventually classified 35th in the updated rankings.