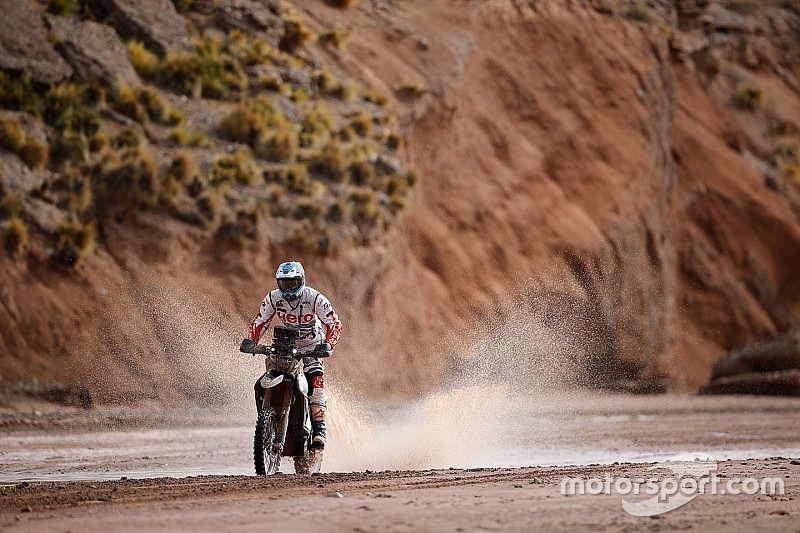 Hero’s CS Santosh broke inside the top-40 in the overall classifications of Dakar Rally despite suffering a crash in the 10th stage on Tuesday.

Riders had to complete an initial long liason of 424 km before starting off with the stage proper, which comprised of a distance of 373 km, taking the day’s total running to 797 km.

The navigational challenges posed by the stage in Argentina shook up the front of the pack, but Santosh managed to improve up to 39th in the standings after posting the 44th fastest time of the day.

The 34-year-old suffered a fall in the second half of the stage, but quick intervention from the Hero team allowed him to get back on his bike and reach the bivouac in Belen.

“I began the stage well and was enjoying the stage,” he explained. “But 20 km before the neutralization point, in the fast-piste section, I took a big jump, landed on some rocks and had a big crash.

“It was very difficult from then on and somehow I made it to the end of the first special. I met the team there and we were able to quickly fix the bike and got going again to finish the stage.

“It was really tough today but we got it done and now 3 more days to go for Cordoba.”

Santosh’s rookie teammate Oriol Mena had no trouble whatsoever as he ended the stage in a remarkable fourth position, just 20 minutes down on stage topper Matthias Walkner (KTM).

Despite being a rookie in Dakar, Mena holds the 14th spot in the general standings and has a real shot at finishing inside the top-10.

“We decided that today would be a good day to attack for me and I did that from the word go, while riding safe,” he said.

“I also did well in the tough navigation in the 2nd part of the stage and got all the waypoints correctly.”

Meanwhile, Sherco TVS’ sole remaining rider Joan Pedrero also had an encouraging day, the Spaniard moving up to 17th in the order with the 10th fastest time of the day.

He trails Mena by just under 30 minutes heading into Wednesday’s Stage 11.