Chaleco starts the Dakar on top!
It's an italian bike the first winner of the Dakar 2012: Chaleco Lopez on Apriliia wins the stage 1, from Mar del Plata to santa Rosa de la Pampa. 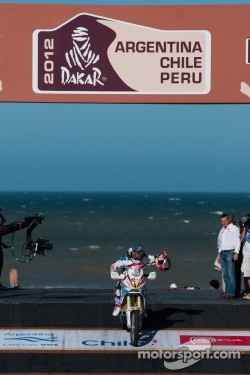 SANTA ROSA DE LA PAMPA - All stress from the previous days in Mar del Plata related to last minute problems before the race starts are now behind and now it´s time to get to serious things. The last day of 2011 was just a bridge to the start of the 33rd edition of the Dakar. “Plaza Colón” was the place of the celebration with an invasion of an enthusiastic crowd that watched the 443 participating crews go through the podium between 3p.m and 9 p.m.

No time to celebrate new year´s eve with the first bike that started at 5.45 a.m. this morning from Mar del Plata heading to Santa Rosa de La Pampa, more than 800 km away.

The goal of this short special stage of 57 km was to get in race mood establish the starting order for tomorrow´s stage. And it was in this context that Chaleco López honored his motivation. The Chilean, who last night said he was going to ride with no pressure, started to attack and earned his first stage win of the Dakar 2012 over Marc Coma, last year´s winner, for over 14 seconds. It was a brief stage, but important to show that López is in shape and to see that fighting for the title is not out of reach.

It was also a good stage for Arnaud Besnier who finished 61 and Edouard Boulanger 79.

Chaleco will open the track tomorrow for the stage that will join Santa Rosa de la Pampa and San Rafael next to the Andes Mountains. There will be 782 km to cover, 295 of which will make the timed section.

Francisco López: “I´ve been cautious, I started very fast this morning because the first part of the special stage was hard and there were many spectators. The Dakar´s first stage must always be faced with caution, avoiding risks and it is useful to take the race rhythm. Fortunately, the last 20 km were fast and I succeeded guiding in an aggressive way, showing of the power of my Aprilia.”

We feared Alonso’s Dakar was over, admits co-driver Coma