In the bikes, as was widely anticipated, the special victory went to Alfie Cox who started 5th this morning. The South African caught team mate Cyril Despres just before the refuelling CP at 144 km but the short and rapid special didn't allow them ...

In the bikes, as was widely anticipated, the special victory went to Alfie Cox who started 5th this morning. The South African caught team mate Cyril Despres just before the refuelling CP at 144 km but the short and rapid special didn't allow them to catch the lead group of Sainct, Roma and Meoni, thus depriving Alfie of the chance to take the overall lead. 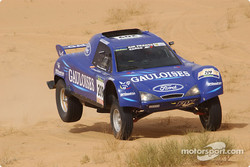 Alfie Cox (Gauloises KTM) 1st in 2h27'54
"Up to the refuelling we were wide open over ground used two years ago on the Rallye Tunisie. Just before the refuelling CP the road book wasn't too clear and I caught Cyril who I'd had in my sight for a while. From refuelling on there were more dunes which slowed the lead group down a little and allowed me to pull back 5 minutes. I was a little disappoint not to catch the lead group -- the problem was that the special was too short and too fast."

Cyril Despres (Gauloises KTM) 3rd at 1'59
"A short day and very fast with bad visibility this morning. After the refuelling me and Alfie took it in turns to take the lead and managed to close the gap on the leaders. The terrain though was a little too easy to pull back much time. I don't know the exact profile of tomorrow's stage but it should be a bit more complicated than today and hopefully that will work to my advantage."

Fabrizio Meoni (Gauloises KTM) 4th at 2'58
"Today was just a promenade -- almost like a rest day -- but I don't think tomorrow will be the same. I reckon that the ground will be harder and I'm going to have to be careful with my rear tyre. By my calculations if I destroy the rear bib mousse and have to wait for Sala I'll lose about 40 minutes. Rather than do that I prefer to back off a little, let the others go and suffer the consequences."

Richard Sainct (Gauloises KTM) 5th at 5'06
"Today it was inevitable that we would group up and that I would lose some time. The good news as far as I am concerned however is that Alfie and Cyril didn't manage to catch us. If that had been the case Alfie would have taken the overall lead. I think tomorrow will be an interesting day. Nobody knows exactly what to expect but it is long and varied enough for somebody to perhaps make a little break.

Jean Brucy (Gauloises KTM) 16th at 11'42
"Before the refuelling CP I got one box ahead of myself on the road book and overshot by about 4 kms. That is the first time I have ever done something like that and I'm a little bit angry with myself. I must have let 7 bikes go past."

Miran Stanovnik (KTM) 7th at 7'13
"Really an excellent day. I started 20th and was lucky enough to catch up with a fast group of five -- Marques, Flick, Brucy and a couple of others. After the refuelling CP we really flew. It was like a cycle race -- as soon as the leader of the pack slowed down a little somebody else took over at the front. We rode like that all the way to the end."

Eric Verhoef (KTM)
"The first 80 kilometres were a bit boring but after that I had a beautiful day -- the dunes were really fantastic. My place isn't that great -- 25th for the moment -- but I didn't lose much time so it is OK. If I hadn't spent so much time on my own I would have gone quicker. When Esteve Pujol came past me I definitely picked up the pace."

Josep Maria Servia (Gauloises Schlesser Ford) 11th at 26'10
"I saw Jean Louis at the side of the piste at km 62. I slowed down to stop but he waved at me to carry on so I don't know what the problem was. For my part I got stuck in the sand twice and lost about 4 or 5 minutes each time."

Gerardus De Rooy (Gauloises De Rooy) 1st at 2h34'40
"Today was 100% perfect over the sand and dunes - on that kind of terrain our trucks are very good. We past Loprais stuck in the dunes and the others on the fast 'hi-speed' sandy going. Winning today means we open tomorrow and I must admit I am a little nervous about it -- my navigator too -- he has never done it before."

Johannes De Rooy (Gauloises De Rooy) 2nd at 1'40
"A lovely day for us -- we like that kind of sand and those kind of dunes. I'm very happy for my son. He says I'm a good teacher but he is also a good pupil."

Autocourse back in time: Ayrton Senna, profile of a champion

Peru: Stage 4 from Nazca to Arequipa was not smooth sailing - video