Francisco Lopez returned to Dakar with high hopes after spending most of the 2011 rally raid season recovering from an injury and today with his strong run on his Aprilia, his return to health is 100%. The Chilean rider won the first stage of the 2012 Argentina-Chile-Peru edition. The first stage was short at 57 km and his winning time was 32:37 minutes; 14 seconds faster than the KTM’s Marc Coma. Third belonged to Argentinean rider Javier Pizzolito who finished 19th last year but is off to a good start on his Honda.

It was the Rally of Tunisia where "Chaleco” Lopez was injured after taking a hard fall and due to the extent of his bone fractures, he underwent multiple surgeries. His comeback as a rider was in the Cross Country Rally event, the Pharaons Rally. It was not a remarkable performance but it was a test to ensure he could take on the Dakar! Today marked his sixth career Dakar stage win.

... the first part of the special stage was quite tough...

“I did not get off to a very fast start this morning, since the first part of the special stage was quite tough, with all the dunes and all those spectators. Moreover, the first special of the Dakar is always more challenging, since you need to find your focus on the race, and the new GPS is somewhat smaller, so I really was very careful. Fortunately, the special's last 20 kilometres were very fast and I was able to drive much more aggressively,” said Lopez.

Behind the top riders was Jorge Boero who had a massive crash that ended his life. The news of the tragedy hit all of the competitors hard; especially the Bike competitors. Dakar is a very demanding and challenging event.

In the Car category, it was a MINI day with a twist of which driver took the first stage victory. That honor belonged to Leonid Novitskiy who landed his first ever Dakar stage win. His X-Raid teammates, Krzysztof Holowzyc and Stéphane Peterhansel, ended second and third. Not a bad showing for the MINIs debut in the Dakar event.

“Today's special was very short, so we put the pedal on the metal, especially in the sandy sector. We only found another car on the course, but I was able to overtake it without any problems. In short: a good result for a perfect day!” said the 2011 Rally Raid World Champion.

Novitskiy started 13th in the Car class and ended up with a time of 32:12, besting Holowzyc by five seconds with Peterhansel nine seconds off the pace of the stage winner.

Holowzyc said about his run today, “Nothing special, we just maintained a fast pace, no problems at all, and our Mini did the rest! This is going to make things easier for us. When approaching the dunes, we asked ourselves: "How is it going to work out?", but the car almost climbs them by itself! What bliss!” 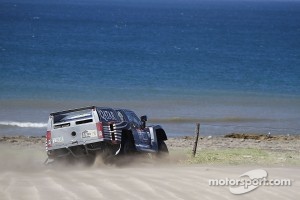 The 2011 Dakar winner, Nasser Al-Attiyah, did not have a good day. With the pullout of the Volkswagen, he ended up in a Robby Gordon prepared Hummer H3. The Qatari driver has a lot of ground to make up -- nearly 10 minutes -- after his Hummer had an oil pressure problem just 2 km before the finish line. Gordon had to tow Al-Attiyah to the finish line in his H3. At the time of the failure, Al-Attiyah said, “We had an engine oil pressure loss and preferred to wait for Robby to tow us to the finish, since we did not want to damage the engine... We will see, but this does not look good... And, whatever happens, this is not a good way to start the Dakar!”

The Hummer drivers had a better day than South African Alfie Cox whose Dakar came to an end when his Team Pewano’s Volvo was on fire but the crew escaped without injuries but the car was destroyed.

Marcel van Vliet took the Truck class victory repeating his feat in 2009 but there are 13 stages to contest. He said, “I am happy to win the first stage, since I hoped to start the race this way. We will see how things go from here. This is just the first stage, only 60 km long, and the race is obviously still very long. But, because we are a young team, people are not so focused on us as they are on the other big teams, but I think they will keep an eye on us too from now on.”

Van Vliet nearly retired from Dakar after placing third in the Truck category in 2010. The Dutchman however continues to race thanks to the Veka team and on the opening day, he placed one of MANs on top of the Truck leaderboard. He ended stage 1 with a time of 37:45 while another racer from The Netherlands, Gerard de Rooy, placed second for his Iveco team. De Rooy is 26 seconds behind the Truck leader. German Franz Echter was third for the first stage and he ended up 56 seconds adrift of teammate van Vilet. What was odd is only one of the Kamaz trucks were in the top five!

The start of the New Year was a good one for Quad rider Sergio La Fuente who shocked the field when he posted the fastest time in today’s stage. With his time of 40:13 minutes, he also made history as the first Uruguayan to take a stage victory in any of the Dakar events. The defending Quad champion, Marcos Patronelli from Argentina was second, 54 seconds off the pace. Tomas Maffei was third, just over one minute off the pace of La Fuente; all were on Yamahas.