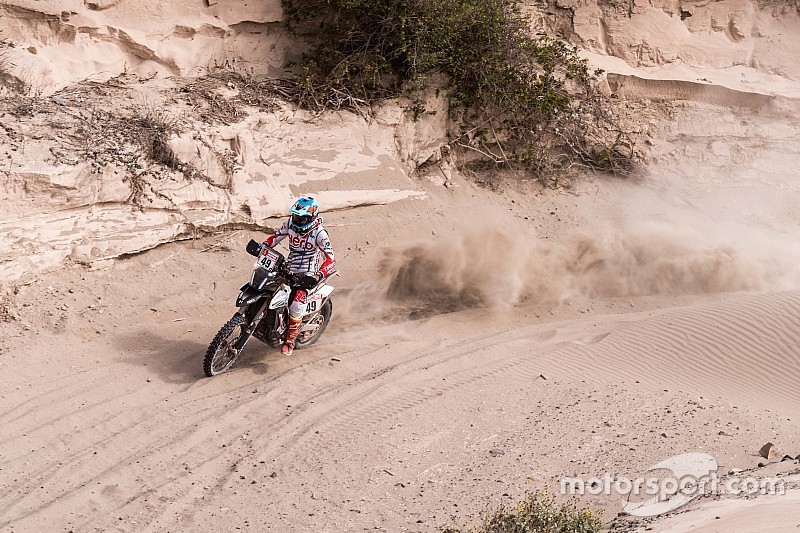 CS Santosh continued to move up the order in the second Marathon stage of Dakar Rally, while Hero teammate Oriol Mena leapfrogged Sherco TVS rival Joan Pedrero in the standings

Competitors had to cover a timed distance of 498 km between Uyuni to Tupiza in Sunday’s Stage 8, with the run comprising of mountain sand dunes at 3500 m above sea level.

Despite admitting that it was the “hardest” stage he’s ever done, Santosh set a time of 6hr31m43s, ending the timesheets in 38th position.

He now occupies the 42nd spot in the general classifications and needs to gain less than 30 minutes to break inside the top-40.

“I think this Marathon stage was the hardest I have ever done,” he admitted. “It was incredibly difficult as we did 80 km off-piste and the camel grass.

“I was physically drained with the high altitude riding and also crashed a couple of times. By the time I reached the marathon bivouac I had nothing left in me.

“This morning we had the longest stage of the Dakar which was tough again.”

Despite being a rookie in Dakar, Mena continued to shine as he ended the marathon stage in 14th place, just 16 minutes behind stage topper Antoine Meo (KTM).

Following this result he has passed Pedrero in the standings, the Sherco TVS rider mustering only a 30th place in yesterday’s stage.

Mena is currently 18th in the combined classifications, while Pedrero sits two places behind in 20th position.

Yamaha's Adrien Van Beveren remains on top of the overall timesheets, with Honda rival Kevin Benavides hot in his heels with five stages still to run.