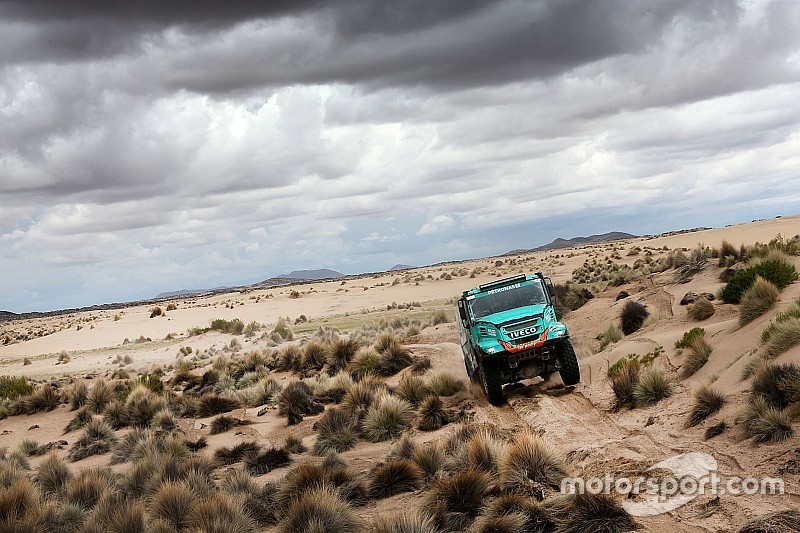 Petronas Iveco driver Gerard de Rooy's quest for a third Dakar Rally victory took a hit on Tuesday as the Dutchman once again fell foul of a puncture.

De Rooy dropped down from first overall to third during the shortened Uyuni-Sa;ta stage, the timed section of which was cut due to adverse weather conditions from 492km to 174km.

The puncture struck with a quarter of a stage to go, forcing de Rooy to forfeit seven minutes - a less dramatic time loss than the half an hour he had to give up to similar problems in first week's Tucuman-Jujuy test.

"I lost more than seven minutes for a tyre problem," de Rooy explained at stage end. "I told [teammate] Ton van Genugten to push [instead of escorting me], hoping that he could enter the top five, to give a good road position for the 'Super Belen' along with Federico Villagra - but the stage was cancelled.

"Things did not go to plan for me, as we also had a problem with the engine cooling."

The Iveco Powerstar's Cursor engine is not prone to reliability issues, and had coped well with racing at high altitudes throughout the rally.

On Tuesday's stage, however, de Rooy was hampered by an issue with the control electronics, which cut the horsepower of the six-cylinder turbo of the truck, forcing the Dutchman to stop and address the issue.

The Cursor engine can cope with the challenge of altitude thanks to its Petronas Urania engine oil, the work of the technical staff at Villastellone and Andrea Dolfi, who oversees the Petronas Engine Fluids department.

To protect the engine on de Rooy's Powerstar, the 10W40 oil was chosen - a conservative selection for the Dakar, as it is directly derived from oil used on the roads.

The viscous oil serves to cool the engine when it's being stressed by heat, and also helps reliability - which had been particularly crucial in the recent marathon stage, where no team assistance could be provided.

The Argentine is currently best of the rest behind a closely-matched top three, which is made up of two Kamaz drivers, Dmitry Sotnikov and Eduard Nikolaev, and de Rooy himself.

Having slipped behind the Kamaz trucks, De Rooy is nonetheless not concerned: "This is a very tough Dakar. The advantage yesterday for us was that Federico now is fourth, and [Kamaz driver] Ayrat Mardeev lost around two hours. There are now two Ivecos challenging two Kamaz. It will be a good fight to the end."