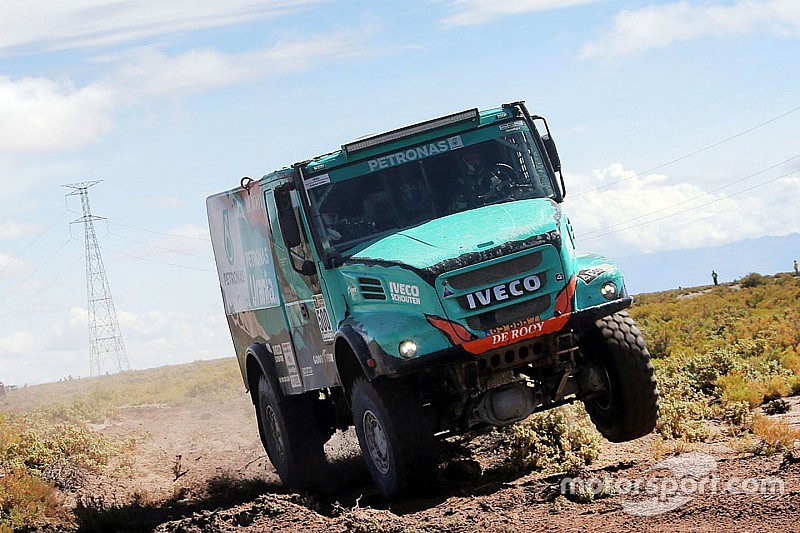 De Rooy was within two and a half minutes of Kamaz pair Dmitry Sotnikov and Eduard Nikolaev in the fight for the general classification lead, but had a tough time in Thursday's Chilecito–San Juan stage, losing ground to the Russian marque.

“When the day starts off in a bad way, there's usually no way to make it all right,” said De Rooy's co-driver Moises Torrallardona. “We got lost looking for a waypoint and we were driving around, trying to find it, losing about 10 minutes.

“We were back on the correct route, trying to make up for lost time, but then we had two punctures – one in front, one behind. We couldn't manage those from inside the cabin with inflate/deflate, so we had to stop twice to change them, losing more time.”

After the second puncture, De Rooy and crew were passed by old rival Alex Loprais, spending almost all the remaining distance behind the Czech driver's Tatra.

“There is some friction between the Tatra driver and Gerard and, just as we figured, we could not pass. We spent 160km right behind him, in his dust," added Torrallardona.

With 24 minutes separating De Rooy and race leader Nikolaev, Torrallardona concedes the remaining two stages and their combined total of 356 timed kilometres won't be enough for the Petronas Iveco team to challenge for victory.

“The race is over," admitted the Spaniard. "[Friday] is certainly not the kind of special where you can make up 25 minutes. Now we'll aim to arrive to Buenos Aires with our third place intact.”