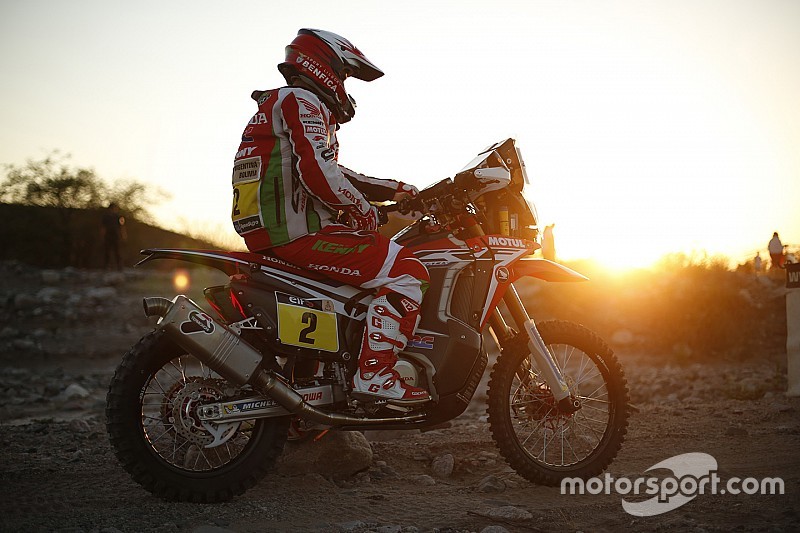 Paulo Goncalves has escaped serious injury after the crash that ruled him out of the Dakar Rally, despite briefly losing consciousness in the fall.

The factory Honda rider had to be airlifted to hospital in San Juan after crashing 118km into the timed section of the 431km stage, ending his hopes of finishing the event.

But despite the apparent severity of the crash, Goncalves was essentially given a clean bill of health by medical staff, suffering only a concussion.

A HRC team statement read: “After a thorough medical check and scan, doctors determined that the blow had resulted in neither fractures nor any serious consequences.”

For his part, Goncalves said he had no memory of the incident that finally put an end to his hopes of finishing the rally.

“It appears that I had a heavy fall, but I can’t remember what happened,” said the Portuguese rider. “I was told that I arrived on the bike to an area where there were spectators and ambulances.

“It’s a Dakar that finishes for me in the worst way. It is a shame because the team really deserved much more.

“The competition is that hard and the last few days hadn’t been going that well. But we have to keep going and think that soon we will be back in competition.”

A tough Dakar for Honda

Goncalves had been one of the main contenders for Dakar victory, taking the lead with victory on Stage 4 and holding it until he dropped behind Toby Price on Stage 8.

But, he was fortunate to continue after Stage 9, when he stopped because of a broken radiator and looked set to exit the rally until the stage was partly neutralised.

The penalties he incurred for the stoppage dropped him from third to eighth, where he was running at the time of his Stage 11 crash.

Goncalves’ Honda teammate Joan Barreda meanwhile was forced to bow out before the start of Stage 7, having sustained a hand injury while he was being towed to the finish of the preceding stage due to engine trouble.

KTM rider Price holds a comfortable 35 minute advantage at the head of the field with two stages to go.