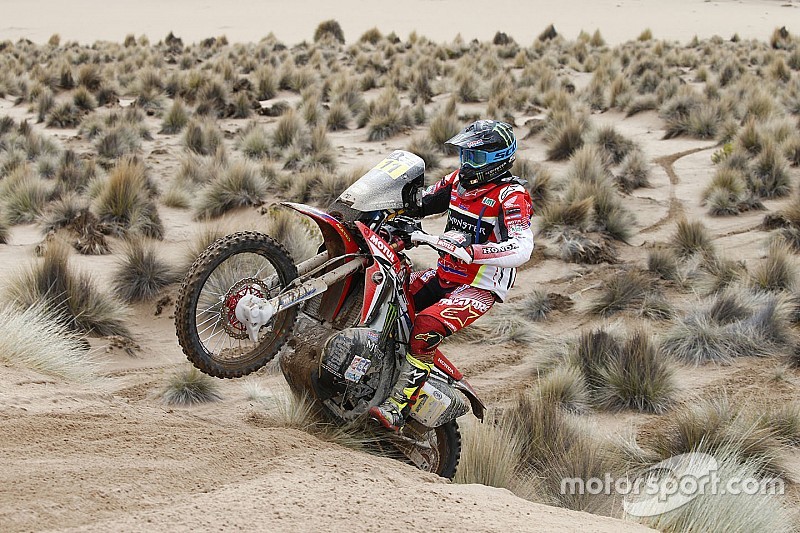 The Honda factory team has filed an appeal with the French motorcycling federation over the one-hour penalty its riders received for illegal refuelling during the 2017 Dakar Rally.

Honda riders Joan Barreda, Paulo Goncalves, Michael Metge and Ricky Brabec were sanctioned for diverting from their route to refuel in the neutralised zone at the Bolivia-Argentine border during the rally's fourth stage.

Barreda had at that point led the rally, but the penalty had all but taken the Spaniard out of contention of victory.

Almost a week on from the penalty being levied, Honda has filed an appeal with the FFM (Federation Francaise de Motorcyclisme), which governs the Dakar's bike competition.

The Japanese team's defence is based on the fact that, while the regulations of the rally specify that no rider can divert from the route in a neutralised zone, they do not address straying from the route in order to refuel.

Honda argues that the case is parallel to that of 2016 car category winner - Peugeot's Stephane Peterhansel – who was investigated over refuelling in an unauthorised area during the road section.

Peterhansel was cleared by the stewards and escaped penalty, despite a subsequent appeal by rival team X-Raid Mini.

As the 2017 bike race stands, a successful appeal for Honda would bring Barreda and Goncalves right back into victory contention – but there appears to be uncertainty over the timing.

Erick Nevels – the head of Dakar's “International Jury” - has stated that Honda should have protested within two days after the sanction for the appeal to be admissible.

Analysis: The winners and losers from the end of F1 engine tokens