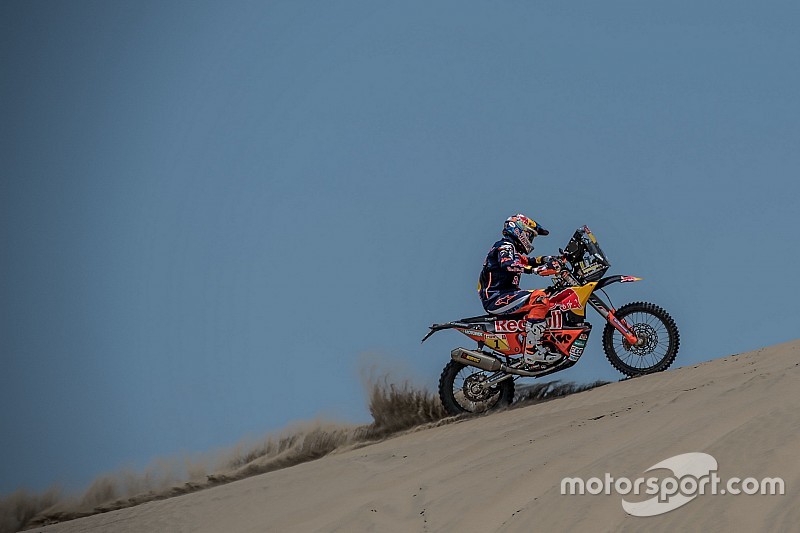 Factory Honda cross-country rider Ricky Brabec has hit out at rival Dakar Rally marque KTM for earning its success “in the office” and “behind closed doors”.

KTM has won every edition of the Dakar’s bikes category since 2001, having taken honours in last year’s event with Sam Sunderland after Honda’s factory riders were all handed one-hour penalties for illegal refuelling.

Brabec’s remarks follow last October’s Rally Morocco, where the American rider accused KTM of lobbying for Pablo Quintanilla – who rides for sister brand Husqvarna – to have time given back to him after the Chilean rider got stuck in a river.

“If they make a mistake, they are always pushing the [Dakar organiser] ASO to get the mistake they made to be written off so they don’t get penalised, or in trouble or whatever.

“I go to race; let’s race in the desert and not in the office with the organisers.

“If I miss a waypoint, or get stuck in the mud and can’t continue, then I take responsibility, I messed up. I’m not going to go to the organisation and say ‘gimme, gimme’.”

Brabec conceded that Honda may have to “play games” in order to finally end KTM’s long stranglehold on two-wheeled Dakar success, but said it would be up to the Japanese marque to outperform its arch-rival in the stages.

“At the end of the day, it shouldn’t be taken care of behind closed doors, behind our backs,” continued Brabec. “But some things are unfair in every type of racing.

“We just have to, as a team, find a way to accept what they do, overcome it, outdo them and make a better race – or a better argument. If they want to play games, we’ll play games."

Honda’s hopes of ending KTM’s long streak look to have been dented by the news that Paulo Goncalves will not take part in this year’s Dakar.

The Portuguese rider suffered a crash while training last week – and while he made the trip to Lima, where the Dakar begins on Saturday, he suffered pain in his knee and shoulder when he attempted to take part in shakedown.

Ten things to watch for in the 2018 Dakar Rally