Barreda makes it two, but "Peter" makes it sixty!

Today's loop around Pisco saw Joan Barreda win the stage and the usual supporting cast of the Dakar step up to the plate and take the top honours, together with talented rookies like Matt Fish and Kurt Caselli. In the car category, Sainz and Al-Attiyah's navigational problems were a blessing for the most experienced of the Dakar champions: Peterhansel, who took his 60th special, and Giniel de Villiers, who climbed to second in the general classification. 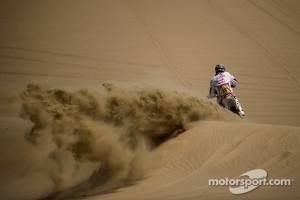 Action on the sand dunes in Pisco, Peru

One of the things that make rally raids special are those little mistakes which can turn the race on its head every day. Specials which seem harmless on paper can sometimes yield surprises.

Today, a small collective navigational mistake by those at the front of the race gave those at the back the opportunity to shine. Following yesterday's winner in Pisco, "Chaleco", Cyril Despres succumbed to the temptation and took a detour around a huge dune at km 75. But it was more difficult than expected for the defending champion to get back on track. In the meanwhile, industrious Joan Barreda never strayed from the course. His handling abilities hadn't gone unnoticed in the two previous editions of the Dakar. The Catalan showed it wasn't a fluke by riding his Husqvarna to the second stage win of his career, made even sweeter by the third place of his helper Matt Fish, who romped onto the stage in the Dakar. Joan Pedrero, another Catalan who's more used to riding in the shadow of his leader Marc Coma, also seized the opportunity to finish second. Cyril Despres' mishaps cost him over eight minutes with regard to the new general classification leader. His teammate Ruben Faria lies second in the overall ranking, 5'36" down on Barreda. Today was the helpers' day!

In the quad category, on the other hand, Marcos Patronelli showed who's the "Boss". After Peru's Ignacio Flores stole the show yesterday, Patronelli became reacquainted with victory and with his traditional rivals Ignacio Casale and Tomás Maffei, who finished third and fourth. He should also keep an eye on Sebastian Husseini, who was the runner-up for the second day in a row.

They all faced the same course, but not all of the leading lights of the car category ran into trouble in the same places. Not even those at the top of the ranking lucked out. Not even Carlos Sainz, the ephemeral leader of the 2013 Dakar... until km 50. The Spaniard and his co-driver were the first victims when they misread the road book and started "driving in circles" through the Peruvian desert. Nasser Al-Attiyah and later Nani Roma had the same problem. Guerlain Chicherit didn't make any mistakes, but his first mechanical issues at the wheel of his SMG buggy cost him half an hour. Nevertheless, his team has good reason to be proud today, as Ronan Chabot drove an identical car to third place. A remarkable improvement for the French rider, who finished 12th in 2012 and was only beaten by two former Dakar winners. Giniel de Villiers and his Toyota finished second, ready to pounce on… Stéphane Peterhansel. The X-Raid Team leader drove confidently throughout the loop stage and grabbed his 60th special in the Dakar, as well as taking control of the general classification with a 2'38" lead on the South African, whom he'd marked as his main rival. Everything's going to plan.

Gerard de Rooy is on fire. With a second straight stage win, the defending champion continues to bolster his position with a few minutes every day... for now. The stage was like the curate's egg for the Iveco team, as their leader's win was balanced by Hans Stacey's mishaps. He made a mistake and tipped his truck over after posting the best intermediate time. Aleš Loprais remains on the prowl behind De Rooy, with Miki Biasion and his Iveco on the bottom step of the provisional podium. The first Kamaz, with Eduard Nikolaev at the wheel, is already 20 minutes down.