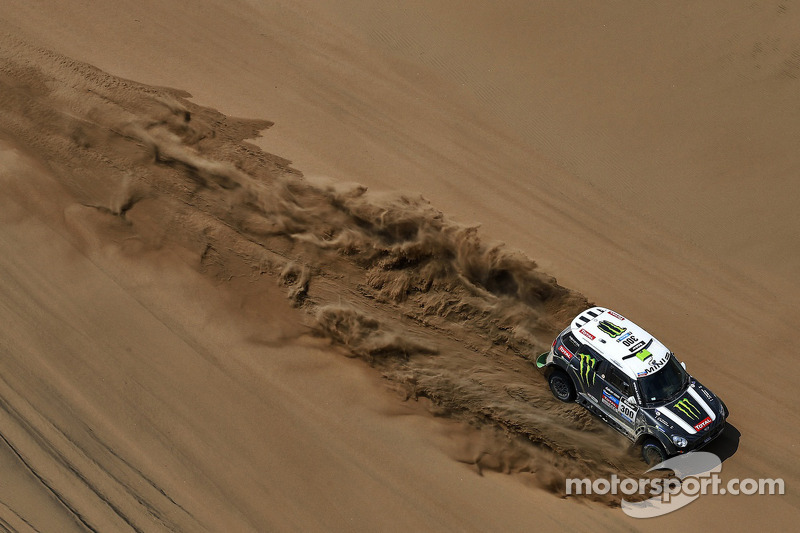 Fourth stage win for the Frenchman in the 2014 Dakar

The French pairing Stéphane Peterhansel / Jean-Paul Cottret in the black MINI ALL4 Racing proved to be the quickest in the 350-kilometre special stage from El Salvador to La Serena. With this success, Peterhansel passed Nani Roma (ESP) in the overall standings and holds the first position, now. The second fastest time was set by Nasser Al-Attiyah (QAT) / Lucas Cruz (ESP) in the white MINI ALL4 Racing. Roma and his French co-driver Michel Périn took their yellow MINI ALL4 Racing to third place, with Krzysztof Holowczyc (POL) and Konstantin Zhiltsov (RUS) in the red MINI ALL4 Racing finishing fifth. While Orlando Terranova (ARG) / Paulo Fiúza (POR) came ninth, with their orange MINI ALL4 Racing. 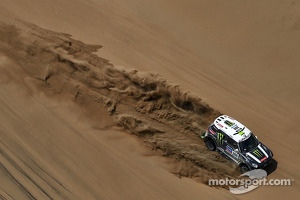 Peterhansel was the fourth to start into today’s stage and completed the 350-kilometre distance without encountering any problems. When Roma suffered a puncture, the Frenchman used the opportunity to pass him. “At this point in time, Nasser already had passed us but then I saw him opting for the wrong direction,” Peterhansel revealed in the bivouac. In the end, he crossed the finish line with a lead of more than three minutes over his team-mate from Qatar who had held the lead nearly throughout the special stage. In the dune field in the closing stages of the session, however, Nasser followed the wrong compass direction, thus losing several minutes. In the overall standings, he holds the secure third position.

Roma started into the stage behind Terranova who displayed a very good pace in the opening stage despite being the first to start into the session and had to act as pathfinder. Then, however, the Argentinean lost a lot of time while looking for a waypoint – and Roma passed him. From this point in time, the Catalan was the pathfinder. “Unfortunately, we then had a puncture and Stéphane was able to pass us,” said Roma. Afterwards, he stayed behind his team-mate to not take any unnecessary risks in the dunes.

By finishing fifth, Krzysztof Holowczyc once again delivered in solid style. But he also suffered a puncture and lost valuable time. His team-mate Terranova also had to cope with a dose of bad luck. He did not only lose time while looking for a way point but “We also got stuck once and suffered two punctures,” said the Argentinean. “This was just a bad day.”

Team Manger Sven Quandt: “As we explained yesterday, our orders for the drivers were made to make sure that they and their MINI ALL4 Racing safely make it to the finish. Particularly Nasser and Stéphane raced at the very limit for several days and we had to intervene before something went wrong. Today, Nani suffered a puncture and Stéphane was able to pass him. By doing so, he didn’t act against our orders.”

Tomorrow will feature the final stage and the presentation ceremony on the podium. But at first, the drivers will have to contest a 122-kilometre liaison and a 157-kilometre special stage to the finish. From there, they will have to cover another 256 kilometres to the first night podium in the history of the Dakar in Valparaiso.

An open road for Coma, MINI in a muddle